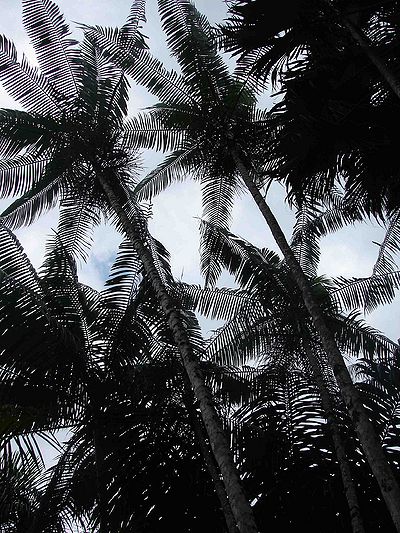 Photo by Vivero de Palmas.
Trinidad-Tobago, and Venezuela. Coastal regions in Brazil, Guyanas, Venezuela, Colombia, and Ecuador, in tidal fresh water swamps and in regularly inundated areas along rivers and streams. In Ecuador it is abundant in the river delta region. Panama (San Blas), Pacific coast of northern Ecuador (Esmeraldas, Pichincha) and Colombia (Cauca, Chocó, Córdoba, Nariño, Valle; and some areas of the Río Sinú and middle Magdalena valley in Antioquia, Córdoba, and Santander), Trinidad , Venezuela (Bolívar, Delta Amacuro, Sucre), the Guianas, and Brazil (Amapá, Maranho, Paná, Tocantins). It grows in large stands of high density in low-lying, tidal areas near the sea and in wet places near rivers, seldom occurring inland and then in wet places near streams or rivers. In the eastern Amazon basin it replaces Euterpe precatoria in these habitats. However, in the Pacific coastal region of Colombia and Ecuador, the two species are sympatric. Nevertheless, E. oleracea grows in inundated places, whereas E. precatoria grows on noninundated soils. Euterpe oleracea can be an aggressive colonizer of disturbed, swampy areas. Despite this, the habitat of the species is threatened by rice cultivation and shrimp farming in coastal Colombia, in swamps in French Guiana; Urdaneta, and in Venezuela. (Gloria Galeano and A. Henderson)/Palmweb.

It requires a hot, moist climate with part shade. It will take full sun as it matures and frost should be avoided.

Special thanks to Palmweb.org, palmweb.org, Dr. John Dransfield, Dr. Bill Baker & team, for their volumes of information and photos.