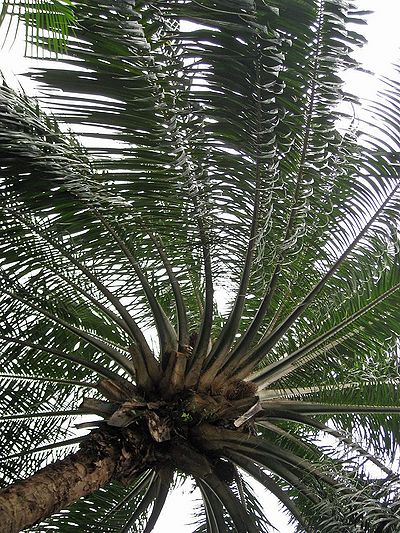 Elaeis guineensis is a handsome tree reaching a height of 20 m or more at maturity. The trunk is characterized by persistent, spirally arranged leaf bases and bears a crown of 20-40 massive leaves. The root system consists of primaries and secondaries in the top 140 cm of soil. Leaves numerous, erect, spreading to drooping, long, reaching 3-5 m in adult trees; leaf stalks short with a broad base. Spiny, fibrous projections exist along the leaf margins from the leaf sheath, wearing away on old leaves to jagged spines. Leaf blades have numerous (100-160 pairs), of long leaflets with prominent midribs, tapered to a point; arranged in groups or singly along the midrib, arising sometimes in different planes.

Sunny, moist, but well drained position. Tropical in its requirements.

Hybrids between this species and Elaeis oleifera are easily made and six hundred hectares have been planted with hybrid individuals in Ecuador (Carrin & Cuvi, 1985). These plants have an erect stem and regularly inserted pinnae borne in one plane. (Borchsenius, F. 1998)/Palmweb. Editing by edric.

History of cultivation: E. guineensis, a native of forested portions of western and central Africa, particularly along rivers, has been spread across Africa by human migrations or intergroup exchange. It may have first been domesticated in Chad, taken to the Congo Basin and eastern Africa long before the arrival of Europeans, and to Sudan 5000 years ago. Africans probably took E. guineensis to Madagascar in the 10th century, the same time it is thought to have been established on the southern coast of Kenya, Pemba and Zanzibar.