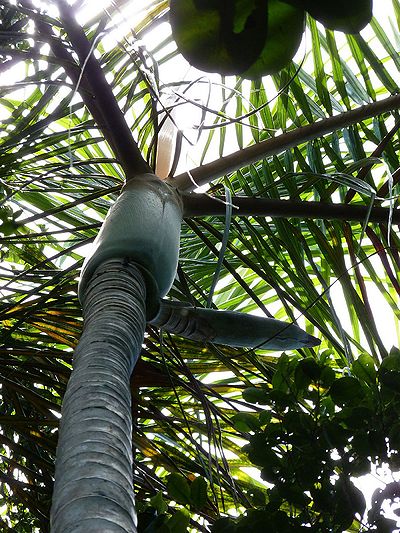 In Palms of Madagascar (Dransfield & Beentje 1995) this species keys out to the two couplets that include Dypsis saintelucei , D. tsaravoasira and D. nauseosa . It differs from the first two in having ruminate endosperm while from the last it differs in having much shorter, more slender rachillae. Dypsis tanalensis , an incompletely known taxon, is mentioned also at this point in the key, but this also has a ruminate endosperm. In general appearance D. carlsmithii does not resemble any of these. In some ways the inflorescence resembles that of D. prestoniana and D. tokoravina , but these two are even more robust and have fascicled leaflets. (J. Dransfield and J. Marcus. 2002)/Palmweb.

Solitary palm. Trunk to 6 m tall, about 51 cm in diam. at breast height, decreasing distally to about 40 cm in diam. below the crownshaft; internodes about 10 cm long. Mature leaf curved and with a slight twist; sheath 140 cm long, about 80 cm wide when opened out, adaxially reddish brown, abaxially green to mid-brown with some wax and sparse scattered scales, with triangular lobes at the sheath mouth; petiole 45 cm long, proximally about 12 cm wide, distally 9 cm, abaxially waxy, abaxially convex,

Over the past three decades there has been an almost insatiable demand for seeds of Madagascar palms. Seeds of even common, widespread species such as Dypsis lutescens and D. madagascariensis, continue to be harvested in the wild and exported in large quantity, and seeds of many other species are widely available. Of course, there are often problems in identifying palms from their seeds alone, particularly in the case of large genera in which palms of markedly different vegetative appearance may have seeds that are virtually indistinguishable. Some of the seeds leaving Madagascar are undoubtedly correctly named. They have flowered and fruited and seem to belong to the designated species. Others, however, are either incorrectly named (not surprising given the problems mentioned above) or carry just nicknames. Sobriquets such as 'slick willy', 'mealy bug' and others are widely used by growers needing reference points when the scientific name is uncertain. In many instances there is absolutely no way of telling where in Madagascar the seeds were collected, information that might help in narrowing down the identity. When asked to try to identify such mystery plants, it has always been easy to say "Wait until it flowers and fruits and then let us know - we should then have little difficulty in naming it." When Palms of Madagascar was published (Dransfield & Beentje 1995), we hoped that the identification of these mystery palms would immediately become possible, but, of course, this was not the case. In the Carlsmith Estate near Hilo on the island of Hawaii grows one such palm, clearly a Dypsis and thus almost certainly from Madagascar. One of us (JM) knew the palm well and had dubbed it (in the days before Palms of Madagascar was published) Chrysalidocarpus 'stumpy' - or Dypsis 'stumpy' as we should really call it. However, it proved impossible to key out with certainty in Palms of Madagascar. The palm fruits regularly and has been used as a source of seeds, so Dypsis 'stumpy' is beginning to be known among palm enthusiasts, and it seems important that its botanical identity should be established. JM sent material to JD at Kew in the hope that a name would be easily provided but, despite JD trying hard to squeeze it into the variability of known species, it has become obvious that it represents an undescribed taxon. There is something rather unsatisfactory about describing a palm from cultivated material without knowing precisely whence the palm came. Given the circumstances of rather uncontrolled palm seed collection from all over the island, we feel sure that this will not be the only undescribed taxon to be introduced into cultivation. There is, of course, already a precedent in the genus Dypsis for naming species from cultivation. Chrysalidocarpus cabadae (= Dypsis cabadae) was described from palms cultivated in the Caribbean and now well known in cultivation but still not known in the wild. Neodypsis leptocheilos (= Dypsis leptocheilos) was described from material cultivated in Tahiti and only very recently has a herbarium collection been made in the wild (Dan Turk, pers. comm.), and Chrysalidocarpus glaucescens was described from plants cultivated in Trinidad. This last name is currently regarded as a synonym of D. lutescens. (J. Dransfield and J. Marcus. 2002)/Palmweb.

D. carlsmithii is one of two palms commonly known as Stumpy, an example of the risk of referring to species by only a common name. But as that moniker implies, this Stumpy is one robust, sturdy palm. A slow-grower, it can reach a height of 20 to 40 ft., with a diameter of about 20 in. at eye level before tapering closer to the apex. One ornamental advantage of its slow growth is the close spacing of leaf scars. Beneath its arching leaves is an attractive orangey crownshaft. In midstate Florida even still-stemless young specimens have been reputed to easily withstand freezes. This species was first seen on the Hawaii estate of former International Palm Society President Donn Carlsmith, and for quite a while its origin was a mystery. It was not described botanically until 2012, and is known in the wild from just two sites whose combined population numbers fewer than 15 plants! Consequently, the IUCN Red List conservation status of D. carlsmithii is Critically Endangered, with an unknown population trend. It may prove beneficial, however, that both sites are in protected areas: Masoala National Park and the Analalava Reserve. (fairchildgarden.org)