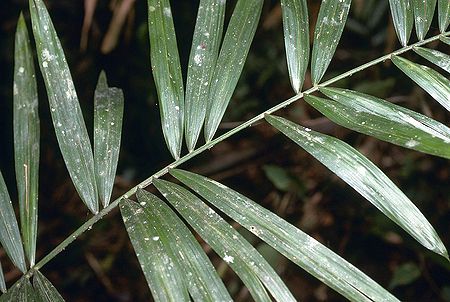 Tenompak, Sabah, Malaysia. Photo by Dr. John Dransfield, Royal Botanic Gardens, Kew/Palmweb.
Sabah and Sarawak. This species is one of the most conspicuous rattans of montane forest in the headwaters of the Temburong River at altitudes of 1,200-1,800 m above sea level. It is variable, some forms being very slender. It is closely related to D. korthalsii and other members of the complex of D. hystrix. (J. Dransfield. 1997)

Slender clustering to moderate montane climbing rattan palm to 10 m, usually less, rarely flowering when ± stemless; stem without sheaths to 10 mm in diam., with sheaths to 30 mm in diam., internodes short, generally not exceeding about 8 cm. Sheaths yellowish-green, covered with dark brown indumentum and very abundant black spines to 1-20 mm, in short lateral groups, the spines fragile and breaking off, leaving short stubs on old sheaths, spines around the sheath mouth erect and papery, to 6 cm; knee well developed. Leaf cirrate to 2.5 m long (much less in slender forms) including cirrus to 80 cm and petiole to 40 cm; petiole armed with horizontal spines to 1.5 cm; leaflets regularly arranged, to about 45 on each side of the rachis, the longest to 35 × 2 cm, armed with scattered bristles or unarmed on the upper surface, armed with a row of bristles along the main vein beneath. Inflorescences arching, to 30 cm, with a peduncle 5-15 cm long; bracts closely tubular at first, splitting and falling at anthesis; male rachilla rusty tomentose to 1 cm, female similarly tomentose, to 8 cm. Mature fruit ovoid or depressed globose, to 13 × 15 mm, covered in 15-21 vertical rows of reflexed straw-coloured scales. Seed globose, about 10 mm in diam.; endosperm ruminate. Seedling leaf not known. (J. Dransfield. 1997) Editing by edric.

Uses: Produces a strong cane; it is not known whether it is of any commercial significance. (J. Dransfield. 1997)

Special thanks to palmweb.org, Dr. John Dransfield, Dr. Bill Baker & team, for their volumes of information and photos, edric.