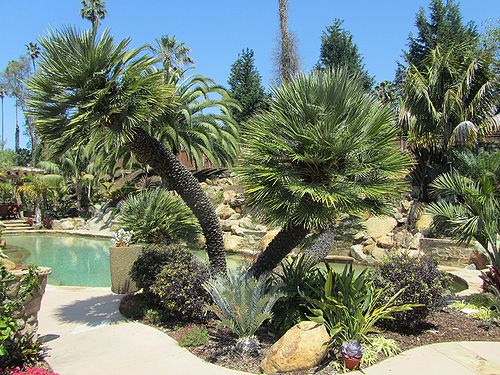 Native to the western Mediterranean region. There are two varieties:

Chamaerops humilis is the only species in the genus Chamaerops; the genus is closely related to the Asian genus Trachycarpus, differing in the spined (not smooth) petioles and the multistemmed clustering habit.

It is a small clustering palm, growing to a height of 1-4 metres, rarely to 6 metres. The leaves are palmately compound, 1-1.5 m long, with 10-20 fingered leaflets 50-80 cm long arranged in a fan at the end of the heavily armed 30-70 cm petiole. In C. humilis var. humilis the leaves are green, while in C. humilis var. argentea they are strongly glaucous a silvery-blue waxy coating, similar in colour to Brahea armata leaves.

Although the northernmost naturally occurring palm in the world, Chamaerops humilis var. humilis is not as cold hardy as the high altitude Chinese Trachycarpus fortunei, tolerating temperatures only down to about -15°C. Because of its multistemmed clumping nature, it is however more likely to grow back if frozen to the ground. C. humilis var. argentea, coming from higher altitudes but further south, is about equally hardy; it grows somewhat slower.

The species grows best in Mediterranean climates like Italy, southern California, Chile, Western Australia and Cape Town, South Africa. Cool winters, with plenty of rain (or, not) and hot, dry summers are the best home for this species. It will take severe drought, but is happiest with regular, if infrequent water.

C. humilis var. humilis tolerates high humidity, but may not look its best in moist climates. As plants get very old, the various stems can be cut back, or cut down from a freeze, and grow back from the base. It is hardy in the milder parts of Great Britain, but not nearly as commonly grown as the more reliable Trachycarpus fortunei.

C. humilis var. argentea is slower growing, and is prone to crown rot from overhead watering, far more than var. humilis. It is probably more drought and heat tolerant, though. Although cold-hardy in Great Britain, the wet climate leads to poor success in cultivation, unless it is given exceptionally good drainage and some shelter from prolonged rain.

In popular literature, C. humilis var. argentea has often been listed under the name C. humilis var. cerifera. This name is however a later publication (1920, versus 1885; Kew Palms Checklist) so is not the valid name for the variety.