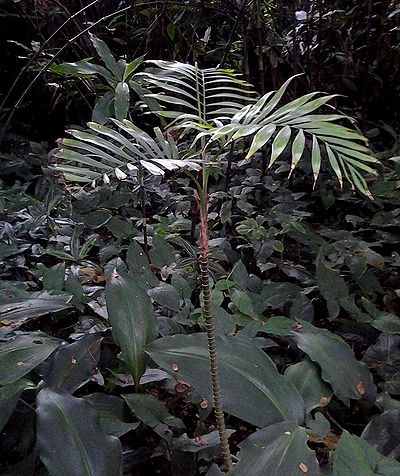 Chamaedorea elegans is almost immediately recognizable, even by the causal observer since it is one of the most widely used house plants in the world. It has found it's way into countless doctor's offices, malls, and many homes. This solitary species to 2 m in height is usually planted as a grouping in pots and sold at super markets, nurseries, and anywhere interior landscaping plants are offered. Since the lower fronds fall off and expose the .8-1.5 cm clean bright green stem, it is especially appealing for its low pruning necessities and growth form which has indivduals growing at varying rates, thus rendering a multi-teered effect in such groupings. Editing by edric.

Requirements: Full shade to heavily filtered light, consistently moist soil, well drained position, will tolerate extreme drought, often planted more than one to a container. Probably the most commonly grown indoor palm in the world. Very resiliant to low light, air-conditioning, drying out, and over watering (tho not necessarily enjoying any of them. Shaded, sheltered, and moist. Very good indoor plant. One of the best indoor Chamaedoreas, tolerating crowded roots and low light levels. Since lower leaves drop from the plant as it grows, older palms have all their foliage on top of the bright green, shiny stem. It grows five to eight feet tall but is usually kept smaller by pruning the stem back nearly to the ground. Growing very slowly, this pale green, single-stemmed palm is most effective when potted three or more to a container. It can also be an effective accent plant in a ground hugging ground cover in a small scale garden. While excellent when used for a house plant, Parlor Palm can also be used outdoors in a shady understory setting as an accent. The showy stems are bright green.

Chamaedorea elegans is truly a versatile and "elegant" plant as the epithet indicates. It can make an elegant statement in the house, as a border plant in the garden, it is excellent as a small palm for a terrarium or bonsai, and even can be placed singly in those hard to plant nooks and crannies in the garden. On the downside, it is somewhat susceptible to mites and thrips and is considered a prime host of several injurious nematodes.

Uses: The inflorescences have a slightly bitter taste, and are considered a delicacy in El Salvador and Guatemala. They are usually eaten in salads, or covered in egg batter and fried. The latter dish is called "rellenos de pacaya", and is often served with tomato sauce, like chiles rellenos.