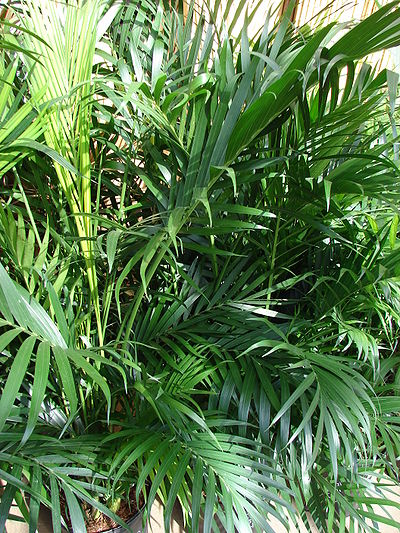 photo by Forest & Kim Starr
Oaxaca. Tabasco. Moist or wet forest along or in streams and cataracts on the Atlantic slope; alt. 300-1,000 m elevation; usually on limestone.

This is one of the rare rheophytes in the palm family which means it grows in areas often covered by standing or flowing water.

A small, attractive, trunkless, clumping palm, to about 2m (6ft) high, and 2.5m (8ft) across, with glossy, dark green leaves, and long thin leaflets. It will eventually form quite a large dense, clump given time. (It is occasionally used as a hedge plant.) This trunkless habit, along with its flexible long thin leaflets is an adaption that allows as little resistence as possible to flowing water, helping to prevent it from being washed away during floods. As the trunk grows, it creeps across the ground helping to anchor the plant even more securely against the forces of water. Editing by edric.

This is one of the toughest of the "Chams" and may be the most hardy. It will take some sun if given adequate water. But like all Chams it is susceptible to spider mites in dry and indoor conditions, which reduced it's popularity as a house plant which peaked in the 1970s. But with its dark green and tropical glossy foliage, it is still a very worthwhile outdoor palm for those marginal climates where a tropical look is desired. Since it often occurs on limestone, similar treatment with additions of lime may prove beneficial.

Another of the Chams that was introduced to Europe in the first half of the 19th century during what was an apparent craze for indoor tropical foliage at the time. It again gained popularity as an indoor landscaping plant in the 1970s until better candidates were found.

The epithet is from the Latin cataracta, refering to cataracts, the wet rocks along water courses in its native habitat.