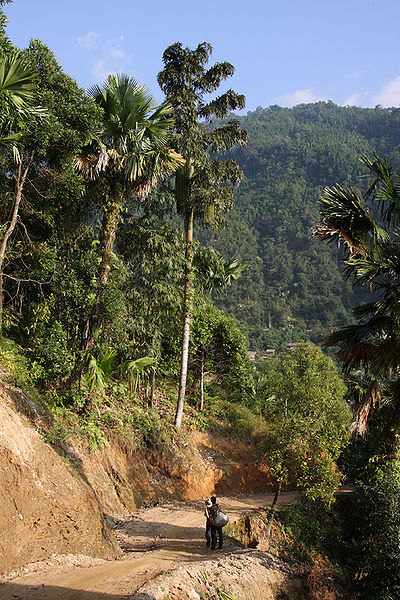 Northern Vietnam 2009. 500 m asl. to 2000 m asl. "Our new porters head off toward the giant Fishtail palm Caryota maxima (not that they had any interest in it), flanked by Livistona jenkinsiana." Photo by Nick.
Laos, Malaya, Myanmar, Sumatera, Thailand, and Vietnam. To elevations of 2200 meters.

As its name suggests, this is a very large palm, up to 33 m. tall, with a very long smooth crownshaft. The leaves are dull green, with drooping leaflets. Stem: Solitary, upright, to 30-33 m. tall, and 30 cm. in diameter, older palms ringed with slender, widely-spaced leaf scars Leaves: Bipinnate, induplicate, to 5 m. long, with dull green, pendulous leaflets growing in one plane. The leaflets are obdeltoid and praemorse. Flowers and fruit: Inflorescences are massive, 1-1.5 m. long with many pendant branches with staminate flowers and pistillate flowers on the same inflorescence. Fruits are up to 2.5 cm. long and pink to dark reddish-purple when ripe. Editing by edric.

It does best in the tropics. For cooler areas, however, Caryota maxima var. "Himalaya", would be a better choice. but both very cold hardy, perhaps 19`F. Full sun, moist, well drained position. Think twice before putting it into an average sized garden (it does get BIG). Hardiness USDA zone: 8b

Relatively short lived for a plant of this size. This can cause problems if trying to remove it from an established garden. Extreme care is required when handling the fruits, in which calcium oxylate crystals are found.

C. maxima is a monocarpic species, however two reports claim that C. maxima var, "Himalayan" is NOT monocarpic! The large, pendulous inflorescences of this palm appear on a mature palm at each node (leaf scar ring), ripening from the highest to the lowest.

Though known in cultivation for a while now, especially in California where it is grown under the name Caryota urens or “Mountain Form,” this fabulous, hardy species still is rarely seen around. It is a fairly large, vigorous, and extremely fast-growing tree (up to 2 m (6.5 ft) per year) with a dense crown. This Fishtail is frequently seen growing semi-wild in the foothills of the central and eastern Himalayas up to 2400 m (7800 ft) a.s.l. As indicated by its habitat, and by experience from cultivation, it is by far the most cold tolerant Fishtail Palm, guaranteed to stand up happily to cold winters with snow and moderate frosts to -7°C (19°F). (RPS.com)