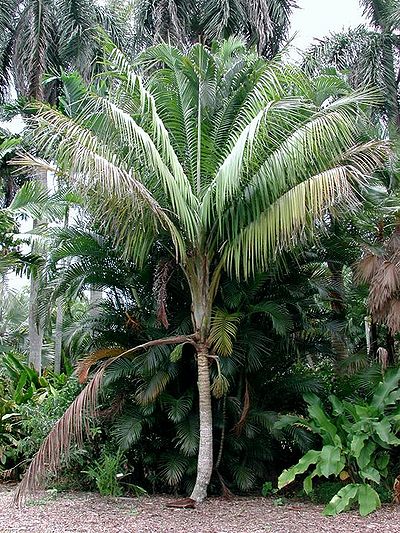 Florida. Photo by Dr. J. Roncal/Palmweb.
banks and arroyos in the hills and mountains of Hispaniola and western Puerto Rico. (S. Zona. 1995)/Palmweb.

All three natural populations are located in the semi-evergreen, limestone forests of northwestern Puerto Rico. These forests are at elevations of 100 to 150 meters. The habitat areas are wet and humid, and the natural populations are found in level or almost level areas around stream banks. These palm trees will grow in sun or shade. In the upper part of the Rio Camuy, some individuals are located at the bottom of deep canyons.

RANGE AND POPULATION LEVEL: Until 1980, this palm tree was known from only one site, Quebrada Collazo, a small stream near San Sebastian in northwestern Puerto Rico. Only 44 individuals remain there. Two additional populations have been discovered within the last decade; one site, along the Camuy River, was discovered in 1980. The other site, along the Guajataca River, was found later. The combined population at these two sites is 220 individuals. In addition, two new populations have been established from palm tree seedlings, one in the Puerto Rican Department of Natural Resources' Rio Abajo Commonwealth Forest and the other at Camp Guajataca, owned by the Boy Scouts.