Clinostigma savoryanum is endemic to the Ogasawara (Bonin) Islands south of Japan, 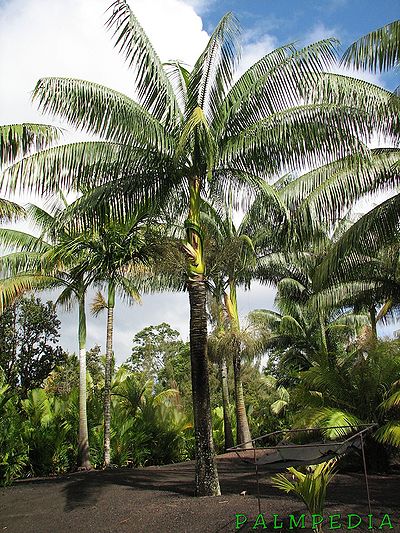 Hawaii.
where it is found in wet rainforests. This species is present on Anijima, Hahajima, and Mukoujima, but is rare on Chichijama. Clinostigma has a center of diversity in the southeastern Pacific, and reaches its most northern distribution, with Clinostigma savoryanum, on the Osagawara Islands.

The Osagawara Islands are oceanic islands that are located 1000 km south of Tokyo in the northwestern Pacific Ocean. Three island groups are present, that contain up to 30 islands that have a subtropical flora. The basal rocks of the Ogasawara Islands may have formed up to 45 million years ago, although the current emergent islands are probably only several million years old. The islands have two rainy seasons, the first from May to June and the second from October to November, and a dry season during the height of summer from July to August. The islands contain 330 native vascular plants, two native terrestrial vertebrates (a fox bat and a lizard), 11 extant land birds, 800 insects, and 100 land snails. Forty percent of the vascular plants are endemic to the Osagawara Islands, meaning this is the only location in the world where those species are found, much akin to the way Madagascar.

Trunk type: Solitary. Hight: To about 15 meters, (50'), with a whitish waxy crownshaft. Leaf detail: Pinnately compound, with fine leaflets, and drooping leaflets. Fronds to 3 meters, (10') in length. Perhaps, the most frost tolerant of the Clinostigma's. These are normally quite tall, with gorgeous pendant leaflets and prominent crownshafts. Smaller than the other Clinostigma, C. savoryanum has a four to five foot slender crownshaft, slightly bulging at its base, which is very light green, or even white in color. The leaves are hemispherical in profile, slightly arching and pendulous. (This is a monoecious meaning that the pollen and ovules are produced in separate flowers (staminate and pistillate flowers respectively). (Smithsonian Tropical Institute) Editing by edric.

Clinostigma savoryanum, is visited by small native bees (Hylaeus yasumatsui, and H. incomitatus), on Anijima within the Ogasawara archipelago, but only by introduced honeybees on Hahajima. Researchers studying visitation to native plants on the Ogasawara Islands, suggest that competition for nectar and pollen, results in the dominance of non-native bees in disturbed forests with high numbers of non-native plants. In intact forests with less introduced plants, and fewer non-native bees, native bees are the dominant visitor to native plants, such as Clinostigma savoryanum. Clinostigma savoryanum populations, are currently threatened by habitat loss, due to expanding human settlement, and the degradation of the forests, which is primarily due to logging practices. Insufficient data is available on the number of populations and the number of individuals of this species to determine its risk of extinction therefore it considered as “data deficient” by the IUCN in the 2006 Red List of Threatened Species. (Smithsonian Tropical Institute)

A fascinating and very beautiful palm that is native only to the remote Ogasawara (Bonin) Islands, a small group of ragged volcanic islands far off the coast of Japan in the Pacific Ocean. One of the smaller species of Clinostigma, it grows a slender, smooth, light gray trunk that supports a light green crownshaft with a whitish waxy hue. The slender, pinnate leaves are elegantly arching, their leaflets distinctly drooping. Its habitat lies further north than that of any other closely related palm and it is reputedly more cold tolerant than any other Clinostigma. The Bonin Islands Palm is the only one in its genus that can be successfully grown in frost free warm temperate climates such as southern California, however, rumor has it that many plants in cultivation labeled as C. savoryana are not actually this species. (RPS.com)