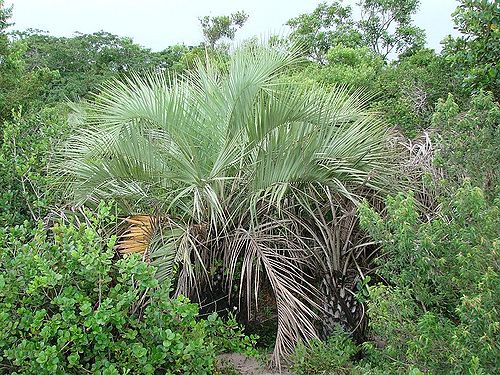 Butia catarinensis grows in huge populations in parts of Southern Brazil along the coast especially around Laguna, Santa Catarina, Rio Grande do Sul. The trunk is very fine, and the palm rarely reaches 3 m height. Editing by edric.

Butia catarinensis starts to show damage at around -8C, odorata will take a couple of degrees lower. Cold Hardiness Zone: 7b

"Butias of the coastline of Santa catarina and north Rio grande do Sul, which formerly known as odorata are now officially catarinensis, a new species. Elongated seeds and small trunks. If you have a Butia `capitata` with round seeds its an odorata now. If you have a `capitata` with elongated seeds it could be a catarinensis or a real capitata. I had seeds from the real Butia capitata sent to me some 3 years ago and sold quite a lot of real capitata seedlings in the UK. These seeds were very similar to seeds of catarinensis , slightly more pointed at both ends and symeterical, shape of a rugby ball." (Nigel Kembrey)

This palm is formally classified as Butia capitata var odorata. Many experts had consider it should be a separate species, and having seen the palm growing in the wild one could only agree, as it could not be more different. Native to Southern Brazil and named locally Butia de bahia or Butia of the beach, the palm is small compared to the usual Butia capitata (now B. odorata), the trunk rarely exceeds 6 inches width and 3m height. The span rarely exceeds 2 metres. Considerably hardy, and extremely beautiful, it is extremely hard to understand why this palm is not in cultivation. It will make the perfect palm for the small European garden and seems destined for a successful introduction into general cultivation. The palm grows by the million in parts of Southern Brazil, and every house seems to have a palm in the front garden as it is small, decorative with beautiful blue/silvery leaves and never gets too large. Palms are available from seedlings to total height to mature fully grown specimens with 3m trunks.. (butia.nl)

This smallish Butia from Santa Catarina and southern Brazil is a compact, wind resistant palm with a short trunk, a small crown with often stiff, upright leaves and small fruits and small ellipsoid seeds. Seeds and plants of this species have in the past been distributed as B. capitata var. odorata, B. odorata or B. capitata "Nana". A Butia cultivated in France as B. capitata var. strictior might belong in this species. (exotischezaden.nl)

Bract stalk smooth, glauca, without tomentum lanuginous, Plant with stems up to 2 feet tall and 15-43 cm in diameter; bract of the inflorescence stalk widest above the middle portion and ending abruptly in a short beak; fruits more long than wide, narrow-oblong............ Butia catarinensis. (From the portuguese)