Bactris gracilior is found on the Atlantic slope from southern Nicaragua (Zelaya), 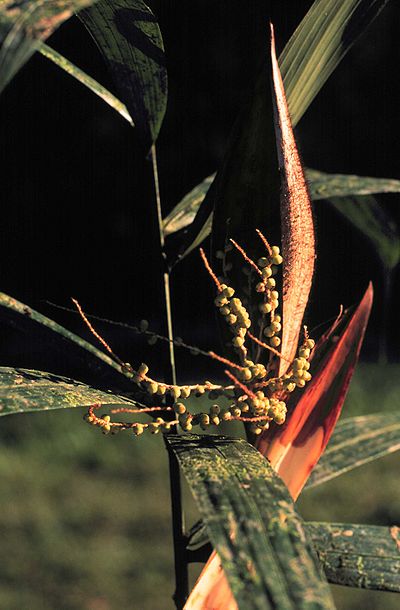 In all of Central America on the Atlantic slope. In Costa Rica: Alajuela, Limón, Heredia, on the Atlantic slope rainforests in heights of 300 m. In the Guanacaste Conservation Area: Abundant in rain forest, in a location where they are undisturbed, mainly in primary forest. Pitilla Station, Forest Pasmompa, Sector Mount Sele, Cocoa Station. In the Forest Pasmompa, Pitilla Station: Path Memos, Row Orosilito Climbing up to 800 m. above sea level in the rest of the wooded area south and east of the resort. In season there are small groups Cacao Trail, to La Cima between altitude of 1000-1200 m. elevation and a few individuals in Forest Arenales.

Note: Found in forested areas in the Santa Cecilia alrdedores to 300 m., mainly on the banks of the Rio Sucio, and along the Rio Mena.

A small solitary palm, with shiny green, pinnate leaves, and slightly curved, spiny stems, which eventually reach about 3m tall. Typically forms small clumps of plants (cespitose). Solitary, but forming multi-stemmed groups crowding together, almost always very erect stems and slightly curved when they reach heights over 3 m. Hight: 2-4 m. high, and about 2 cm. in diameter, with black spines on average 2.5 cm. in length and 1 mm. in diameter, the longest ones on the stem void around the nodes, area of internodes almost free of spines, denser in the terminal area, covering the living, and dead petioles. Holds an average of 5-9 leaves, with black spines present on petioles, these are less in number on the rest of the rachis, and very dense around the petiole, 3-5 cm. long, the leaflets are covered with very small spinules as well as on the underside. 10-24 fronds per side. The position of the pinnae at the sides of the rachis, moderately arranged in threes. Inflorescence bracts are well protected by a clear brown-cover of small dense spines, divided into 8-23 rachillae. Pineapple infructescence in a dense, short relativamete peduncle, and therefore the racima hangs down close to the stem, fruit ovoid, mature red-vivo, with aryl yellowish, 1-1.3 cm. in length, diameter 0.9-1.1 cm. It flowers from the month of July to August, September and December it bares fruit. It is common to find specimens with very ripe infructescences and inflorescences or even both. Stems hard to cut. Important for species of Hesperiidae that feed on foliage no matter if the flowers haven't even opened. Inflorescences attract Cyclocephala species, Staphilinidae and several small Diptera. Also species of Curculionidae of 3-4 mm. in size among other species of microcoleopteros. Editing by edric.

A pretty, relatively sparsely armed Bactris from lowland rainforests in central America with thin, clustering stems to 4 m (13 ft.) tall and ascending leaves with beautifully grouped leaflets that are glossy green above and brownish below. An easy to grow palm for tropical climates that appreciates some shade and protection under established canopy. Cold Hardiness Zone: 10a.