From Palmpedia - Palm Grower's Guide
(Redirected from B. edulis)
Jump to: navigation, search

Brahea edulis is endemic to the Mexican Pacific Is. Dry woodlands, usually in limestone deposits. 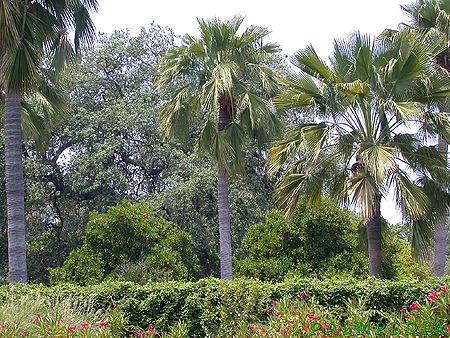 Hight: 12 m. Spread: 4 m. Growth rate: Slow. It is hardy, thru zone 9. Flowers: monoecious ( both male and female ). The plant prefers light (sandy), medium (loamy) and heavy (clay) soils, requires fast draining soil, and will grow in nutritionally poor soil. This Palm, prefers acid, neutral, and basic (alkaline) soils. It will not grow in the shade. It requires dry or moist soil. Although, there have been no reports of edibility, the fruit is almost certainly edible either raw or cooked[K]. It is about 35 mm in diameter. Succeeds in most fertile moist but well-drained soils in a sheltered sunny position. Tolerant of poor dry soils. This species, tolerates several degrees of frost, if it is growing in a dry sunny climate. Editing by edric.

Trees are quite wind and salt hardy. They thrive in drier subtropical conditions and don't do as well with constant humidity. Grow in almost any soil type, water is need infrequently, and once extablished, the plants need little or no care. Propagation: By seeds, which take 3-6 months to germinate.

Brahea edulis (Guadalupe Palm, Palma de Guadalupe) is a palm endemic to Guadalupe Island, Mexico; a few stands have been planted elsewhere. It is a fan palm which grows 4.5–13 metres tall. It grows between 400 and 1000 meters above mean sea level. The entire native population consists of old trees with little successful recruitment for 150 years or so. Until recently, Guadalupe Island supported a large goat population (estimated at 100,000 in 1870, and 5,000 in 2000). The presence of these goats prevented regrowth of the native trees, including B. edulis, and as a consequence, the ecosystem was drastically altered: the once verdant island turned into an almost barren rock, with weeds replacing the former forests. Below 800–900 m ASL, the palm is essentially the only remaining tree, occurring in a major subpopulation and scattered groups in sheltered locations. Above that, there used to be a band of mixed woodland where the palm was accompanied by Island Oak and Guadalupe Pine. This habitat has now all but disappeared due to the other trees becoming pushed back into higher regions. The species was probably declining slowly since the mid-19th century. Its range might even have expanded a bit until the mid-20th century however; part of it was shared with other trees as noted above; especially the pine, it's a towering species that presumably grew in many sites now occupied by the palm. In addition, a forest of Guadalupe Cypress and California Juniper shrubland existed in the palm's present range; the cypress forest was eventually destroyed by the goats and the juniper is nowadays completely absent from the island. Although endangered in the wild, B. edulis is cultivated, especially in California.