Acoelorraphe wrightii is Native to Florida, the Caribbean and Central America, 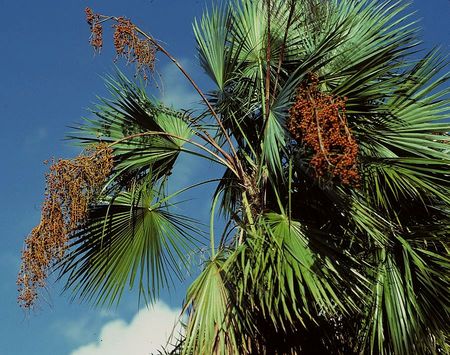 where it often grows in swampy, sometimes salty soil.

It is a clustering, palmate-leaf palm that forms clumps up to 15'/4.5m tall and 20'/6m+ wide. These clumps tend to be much narrower in diameter at ground level than at the tops- the effect is an inverted triangular-shaped clump. The stems are about 4"/10cm in diameter and develop a fibrous matting that is a deep red-brown in color. Leaves are on relatively short petioles and distinctly half circle with slightly silvery undersides. The leaves are about 2'/.6m wide and 18"/45cm long. The petioles are armed with small teeth. Editing by edric.

In a Mediterranean climate this is a pretty slow-growing palm. A 5 gal plant can take 10-20 years to reach adult height, but it starts to sucker at about that size (5 gal). It is also not too choosy of soil type, growing in nearly solid clay, to sand, and has a high tolerance for salt water. It is relatively uneffected by high winds, and is somewhat drought tolerant, though can also grow in standing water. If it weren't so slow growing, it would be a great landscaping palm for southern California, but it is a pretty rare palm in that area.

These palms are quite drought tolerant, and will thrive with no special care in Mediterranean climates like Southern California, Western Australia, etc. without a great deal of extra water. However, they are native to swampy places and will do much, much better is watered more heavily, or, even better, sited in a swamp.

It does require continuous trimming of dead leaves, or else one ends up with a large, messy, dense shrub that can be pretty unsightly.

I have discovered that this palm is not all that great about being transplanted, but don't know if that is the 'norm' or if I am just bad at transplanting.

According to Dave Bleistein, of La Habra, California, these palms will readily take transplanting and the attendant abuse provided they are watered heavily in the summer time. A six-foot tall specimen dug and moved in May, 2009 had fully rooted in by the end of August, 2009. This specimen had a trench dug to about 12" deep and 12" from the trunk all around its base about nine months before the final move.

In Mediterranean climates, where Ganoderma is a rare problem, this palm is usually disease free. That is not necessarily true in its native climates, where this is a particularly susceptible species to that fungus. Once infected, it is nearly impossible to cure it, and it will usually eventually succumb. As Ganoderma is a soil fungus, no other susceptible species should be planted in its place-ever. It is nearly impossible to eradicate this fungus from the soil once present.