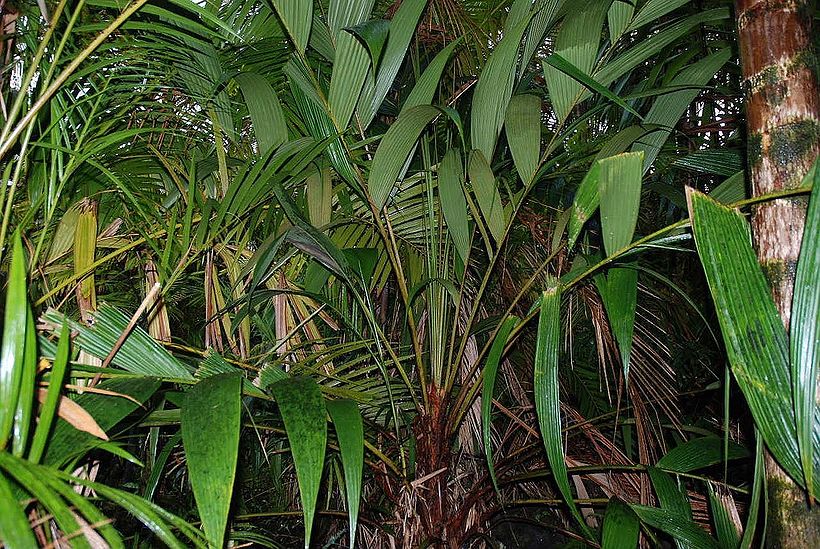 Pholidostachys pulchra shares with P. panamensis a spicate inflorescence and unequal prophyll and peduncular bract. It is a widespread and variable species.

Subspecific variation. Pholidostachys pulchra occurs in at least six geographically separate populations. However, no subspecific division is made here for two reasons. It is not clear if the gaps between some of the populations are artifacts of insufficient collecting, and in most cases there are too few specimens to test for differences amongst populations.

From the north, at low elevations of 245 (15-750) m in Nicaragua and Costa Rica there is a large and apparently uniform population. This population has proximal lips that are slightly different from other populations; they are wider than long and the apex of each lip slightly overlaps the bases of the next two, distal lips. One specimen from near Puerto Viejo in Costa Rica is reported to have clustered stems; all others are solitary. There is a single outlier in Costa Rica, from the Osa Peninsula. The gap between the Nicaraguan and Costa Rican population and the next, in Veraguas, Panama appears real since there are collections of many other palms from the intervening region. The Veraguas population occurs at higher elevations of 712 (400-1000) m and has shorter stems, smaller leaves, smaller inflorescences, and larger fruits than the Nicaragua/Costa Rica population. The next population, in Coclé, Panama, occurs at slightly lower elevations at 519 (100-775) m. It has shorter and narrower apical pinnae with a narrower angle and longer peduncular bracts and interbract distances than other populations. One specimen from here is reported to have clustered stems. The next population occurs east of the Canal Zone, in three areas, the Santa Rita Ridge, Cerro Brewster, and the western end of the Serranía de San Blas. These are likely to represent collecting localities rather than populations, and all are treated together. This population occurs also occurs at slightly lower elevations at 426(200-850) m. It has longer stems, longer and wider rachises, longer and wider peduncles, and longer and wider rachillae than other Central American populations. One specimen (de Nevers 5206) has an unusually short inflorescence. In this population, several specimens are reported to have clustered stems. This and other Panamanian populations (Veraguas, Coclé) have different proximal lips from the Costa Rican/Nicaraguan population; they are usually longer than wide and do not overlap the two distal lips. However, a few specimens from San Blas have proximal lips more like the Costa Rican/Nicaraguan population. Almost 500 km further south, there are two populations in western Colombia. One of these, from near Quibdó at 356 (200-450) m elevation, comprises several specimens that have unusually short inflorescences and smaller fruits. These tend to have the inflorescence bracts surrounding, although not covering, the rachilla at anthesis. Furthest south, from Valle at 129 (12-600) m elevation, there are several specimens that also have unusually small fruits, like those of the population from near Quibdó. However, unlike that population, the Valle specimens have the longest rachillae of any population of Pholidostachys pulchra. (Henderson, A.J. 2012)/Palmweb.

"Great understory palm from central America (mostly Nicuargua)... it eventually grows up to 25' but I have never seen one much taller than 6'. Very slow palms. Have thin (2-3") stems and sparse, irregularly pinnate crowns with maroon to orange new leaves. Most Pholidostachys in cultivation are probably this species, as the other 3 species are very rare in cultivation.. however they all look so much alike (only differ in minute floral details) that most are just labeled as 'sp.'. Not cold hardy! Too bad." (Geoff Stein), edric.

This palm looks just like a very big Geonoma, and has stunning RED new leaves. The leaflets are very broad and of different widths, giving it a striking appearance, quite different from most other palms. It is occasionally clustering and produces spicate infructescences carrying quite large fruits. A perfect choice for a shady, tropical or subtropical garden. (RPS.com), edric.