Difference between revisions of "Phoenix canariensis"

Canary Is., Norfolk Is., Spain. 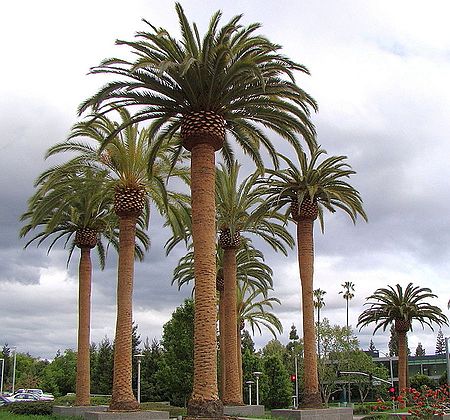 Google headquarters, Palo Alto, Ca. Photo by Kelley MacDonald.
Phoenix canariensis is endemic to the Canary Islands and occurs, scattered in populations of varying sizes, on all seven islands. The largest populations of wild palms are found on La Gomera. From sea-level up to 600 m in a range of habitats, from humid areas just below cloud forest to semi-arid areas where its presence usually indicates groundwater. Ecological requirements of P. canariensis were extensively studied by Liipnitz & Kretschmar (1994). In its native habitat P. canariensis flowers during the spring and fruits ripen in the autumn. (S.C. Barrow. 1998)/Palmweb.

Single-trunked, pinnate palm to 20 m (66 feet) or more tall; exceptionally tall specimens can be up to 40 m (120 feet). The trunk is 60 - 90 cm (2-3ft) in diameter, often with a much wider base. Rounded crown of dark green feather leaves 4-6 m (18 feet) long, with pinnae to 20-40 cm long closely spaced along the rachis. Like all Phoenix, P. canariensis has long, extremely sharp spines at the bases of the leaves, which are formed from modified leaflets. The species is dioecious, with separate male and female trees. The fruit are orange, 2 cm long and 1 cm diameter, with a large seed; the fruit pulp when ripe (solid black) is edible, but usually too thin to be worth eating. They are produced on long, densely branched panicles.

Within the limits of its hardiness (down to about -10°C) P. canariensis is adapted to more habitats and soils than almost any other palm. This, combined with its relative hardiness to cold, make it one of the most widely-planted palms on Earth. Excellent specimens can be found from London to Sydney, from Honolulu to Pakistan, from Tasmania to Durban, and almost anywhere else with a suitable climate. Which is a wide swath of the world.

Best in Mediterranean climates, like those in Italy, southern California, Chile, etc., P. canriensis will also grow in the tropics. Fine stalwart specimens can even be found in cool (but not cold) maritime climates like Northern Ireland, Tasmania, or San Francisco.

While best in full sun and the usual well-drained loamy soil, P. canariensis can tolerate a wide range of exposures, including deep shade, and a wide range of soil types, including sand and heavy clay. It has a unique ability to tolerate both severe drought and flooding very well, which makes them ideal to plant in housing tracts in which the soil was heavily compacted.

In ideal conditions, seedlings grow pinnate leaves within about a year from sprouting, and increase to full width in about 5 years, at which point they begin to form a trunk. They can then put on about 30 cm (12") trunk height growth a year, though they are usually much slower, particularly when young.

In climates cold enough to freeze the entire crown (such as parts of New Mexico), regrowth is slow and often stunted. In popular use, the English name is often abbreviated to the acronym "CIDP".

Uses: Phoenix canariensis is extensively cultivated in warm temperate regions as a street tree or garden plant. The leaflets are used in much the same way as those of P. dactylifera for a range of woven products including crosses for Palm Sunday celebrations. Inflorescence buds are tapped for the sweet sap which is eaten as palm honey. Mifsud (1995) reported an unusual use for leaves of P. canariensis in Malta where fishermen attract pilot and dolphin fish by floating two or three palm leaves on the sea surface near their nets. These fish species are known to congregate under floating objects and so are easy prey beneath the palm leaves. (S.C. Barrow. 1998)/Palmweb.