Zombia antillarum is endemic to the island of Hispaniola. Open scrub on dry hills. 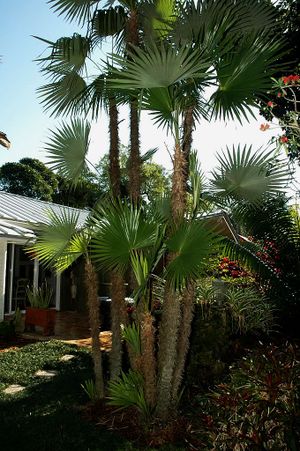 The thatched leaf stems of zombie palm are lined with long, vicious spines that are said to be used as voodoo doll needles. This unusual, dryland palm is clump-forming and native to the Caribbean island of Hispañola, which houses the independent states of Haiti and the Dominican Republic. Wild populations are not common but typically found growing along dry, forested slopes and ridges. On occasion, specimens can be found in moister, lowland sites.

The many upright trunks of zombie palm are heavily cloaked in fibers and downward pointing, spine-like "needles" borne in spiraled rings. The leaf fronds are fan-like, glossy or dull green on top and silvery gray-green beneath. In summer, a short clustered stem of tiny white flowers will appear from the crownshaft of each trunk among the fronds. Bees and other insects visit the blossoms and attractive white, grape-sized fruits follow. (learn2grow.com)

Zombia antillarum is a small palm which grows in dense, multi-stemmed clumps with stems up to 3 metres (10 ft) tall and 5 centimetres (2 in) in diameter. Individuals bear nine to 12 fan-shaped (or palmate) leaves which are greyish-white on the lower surface. The leaf sheaths remain attached to the stem after the leaf drops off. The intervening tissue gradually degrades, and the woody vascular tissue splits, forming the spines which are characteristic of the species. The inflorescence, which is shorter than the leaves, bears bisexual flowers with 9–12 stamens and a single carpel. Fruit are white in colour (although orange-fruited individuals are also known to exist), oblong or pear-shaped, 1.5–2 cm (0.6–0.8 in) in diameter and bear a single seed. The flowers and fruit are borne among the leaves due to the fact that the inflorescences are shorter than the leaves. Trees can produce 5000 seeds per year, predominantly in July and August. The species is believed to be wind pollinated.

Grow zombie palm in full to partial sun and well-drained, sandy soil. It is very drought tolerant, but growth is more robust if plants are given regular moisture during the growing season. Occasionally trim off the lower fronds so the beauty of the trunks can be viewed more easily. Wild populations of this slow-growing palm are threatened in Haiti due to habitat destruction and livestock damage.

This is not an ornamental palm for areas where children frequent, but it is beautiful and ideal for Oceanside gardens and landscapes. Its spined trunks are one of its more visually appealing features, but they can puncture skin easily, so it’s best to situate zombie palm away from areas where people frequent to prevent unexpected run-ins. (learn2grow.com)

"Extremely slow growing fan palm with fascinating spiny trunk (large, thick spines arranged pointing downward) related to Coccothrinax palms. Does best in very warm climates, and even better in humid ones (Miami great climate, Palm Springs OK climate, Los Angeles marginal). I had a seedling for many years that grew maybe to 8" tall. Got bud rot once in a cold winter (down to 24F) but didn't die and eventually grew out of it. Takes this palm in Southern California ideal conditions about 15 years to start making a trunk." (Geoff Stein)