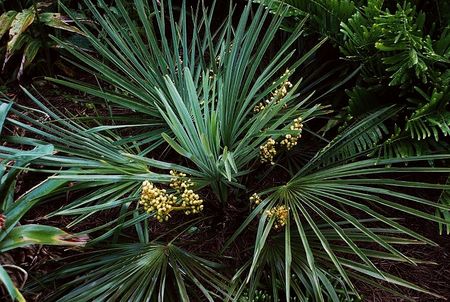 Etymology: nanus from the Latin literally "small" or "dwarf".

"Nice, neat compact fan palm only 2' tall with little or no trunk. Supposed to be pretty cold hardy (zone 8 perhaps?) but not sure. Only a few specimens seen- rare in cultivation still, but recently becoming more available. Plant in photo was flowering last year, even though it looks like a seedling. Now that I've been raising a few seedlings I can say that this is one very slow palm. Seedlings I got several years ago aren't significantly larger... but are still with me. Probably be ready to plant out in another 4-10 years... Trachycarpus nanus can barely survive 27F (mine was defoliated at 26, though it did recover). Not nearly as cold hardy as some hoped, obviously." (Geoff Stein)

Trachycarpus nanus is, as its name implies, smallest representation of the Trachycarpus. The frond color is often an attractive bluish color when mature. Another interesting feature is the fact that the inflorescences are upright, an adaptation to keep them off the ground. A true botanical scarcity and is threatened with extinction in its natural habitat, with the inflorescences being eaten by goats before they fully bloom. The habitat of origin is Southwest China in Yunnan, where it grows on slopes in company of bushes and tall grasses at approximately 6500 feet altitude. Has a high resistance to cold. Subterranean trunks can be up to 6 feet deep and 2 inches in diameter, but rarely above ground. The fresh kidney shaped seeds should germinate quickly, generally 1 to 2 months after sowing. (palmsnc.org)

"Trachycarpus nanus or Yunnan Dwarf Palm, was a very rare palm until the last 5-10 years when seed became much more available. Now many palm specialty nurseries carry this species. This is a true dwarf species growing a trunk of only 1'-3' over many years, and palms purchased from nurseries that appear to be growing taller than that are certainly suspect. My own seedling is quite slow but in just 3 years already has a rudimentary trunk, making me wonder about its true identity. I will keep you posted, as it is from the same source most other individuals in the nursery trade have been grown from in the last 5 years. Mature palms have blue-green flattened leaves with little or no trunk." (Geoff Stein)

The smallest member of the (Trachycarpus) genus, and one of the most sought-after, this diminutive, very adaptable and extremely cold hardy palm does not grow a trunk, or at least, only an underground or a shortly emergent one. From Yunnan, in western China, they are pretty palms, not unlike Chamaerops at first glance, and are often an attractive blueish colour. A further interesting feature is the fact that the inflorescences are held upright, an adaptation to keep them off the ground. Unfortunately this makes them very vulnerable to the goats, with which the area is over-run; consequently very few plants set seed. For many years there were none; this year there are a few; next year? Who knows. For the story of our rediscovery of this unique palm, after 100 years, see Principes April 1993 Vol.37, 64-72. (RPS.com)