Tahina spectabilis is Endemic to Madagascar. Found only in the 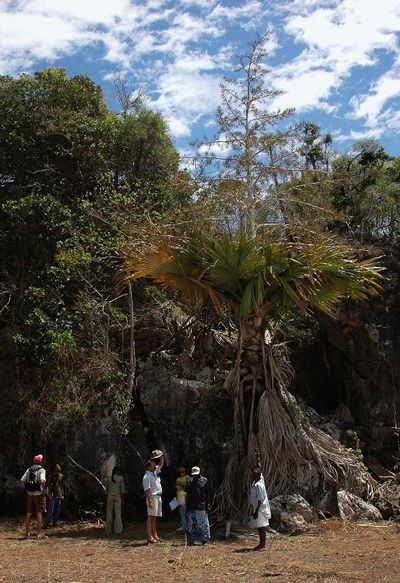 Tsingy, Madagascar. Photo by Dr. John Dransfield, Royal Botanic Gardens, Kew/Palmweb.
Analalava district of northwestern Madagascar. The tahina palm was discovered by French cashew plantation manager Xavier Metz and his family, who were strolling through a remote northwestern region of Madagascar in 2007 when they came across a flowering individual and sent photos to the Kew Gardens for identification.

Occurs in the gently rolling hills and flatlands of the region, now dominated by anthropogenic grasslands, there is a small outcrop of 'tsingy', karst Tertiary limestone, about 250 m long, carrying a semi-natural vegetation. Tahina grows in seasonally flooded land at the foot of the limestone hill at an elevation between 10 and 20 m.

The increased frequency of fire is probably the main threat at present, as most of the former habitat has been transformed. Grazing by livestock also poses a threat to the remaining habitat and to the regeneration of this species.

Efforts are under way to conserve this species through distribution of seed and cultivation in botanic gardens. The site is not formally protected. Regular monitoring of the population is required.

Occurs in the gently rolling hills and flatlands of the region, now dominated by anthropogenic grasslands, there is a small outcrop of 'tsingy', karst Tertiary limestone, about 250 m long, carrying a semi-natural vegetation. Tahina grows in seasonally flooded land at the foot of the limestone hill at an elevation between 10 and 20 m. (Dr's Rakotoarinivo, M. & Dransfield, J.)

Its name is derived from "Tahina", a Malagasy word meaning "to be protected" or "blessed", being the given name of Anne-Tahina Metz, the daughter of its discoverer, while "spectabilis" means spectacular in Latin.

It was subsequently chosen as one of the top ten species discoveries of 2008 by the International Institute for Species Exploration.

This palm is a very rare, protected species from Madagascar. Its less than 100 known members are classified by geneticists as belonging to the palm tribe Chuniophoeniceae. Very little is known about this palm's life cycle, but specimens are the largest palm native to Madagascar, with heights of up to twenty meters and leaves up to three meters across.

Tahina spectabilis, the tahina palm, is a species of gigantic palm that is found only in the Analalava District of northwestern Madagascar. It can grow 18 m (59 ft) tall and has leaves over 5 m (16 ft) across. An individual tree was discovered when in flower in 2007; it was first described the following year as a result of photographs being sent to Kew Gardens in the United Kingdom for identification. The palm is thought to live for up to fifty years before producing an enormous inflorescence and subsequently dying. Fewer than one hundred individuals of the species are thought to exist and the International Union for Conservation of Nature has rated it as "critically endangered".

The species, which produces countless flowers and (after fruiting) dies, is sufficiently different from other known palms to justify the creation of the monotypic genus Tahina, which is now included with three other genera in the tribe Chuniophoeniceae; the other members being found in the Arabian peninsula, Thailand and China. Fewer than one hundred individuals of the species are thought to exist.

Tahina spectabilis normally appears much like other palms. However, when it flowers, which John Dransfield of the Royal Botanic Gardens, Kew estimates as occurring after every 30 to 50 years, the stem tip grows a large inflorescence that bursts into branches of hundreds of flowers. The drain on nutrients this display entails results in the death of the organism within several months.

A gigantic new species and genus of palm, This plant flowers itself to death, producing a huge, spectacular terminal inflorescence with countless flowers. After fruiting, the palm dies and collapses. The new genus is unrelated to any other of the 170 plus palms of Madagascar and is most closely related to 3 genera: one each in Afghanistan and neighboring parts of Asia; south Thailand; and Vietnam and southern China. Editing by edric.

Propagation of this palm has been achieved by seed-sowing at Kew. Seeds were sown during February, having been soaked in water for 24 hours prior to sowing. The seed compost included Seramis (clay granules) and perlite. Two months after sowing, 80% of the seeds had germinated. The seedlings were potted up individually into 'long tom' pots. After three years (in early 2011), the plants were still growing well. (Dr's Rakotoarinivo, M. & Dransfield, J.)

Known only from a single site where the area of occupancy and extent of occurrence are estimated to be well less than 4 km² (even less than 1 km²) and is threatened by increased fire frequency and grazing which may reduce the quality of the habitat for the population and any regeneration. About 30 mature trees have been counted at this site. The species is listed as Critically Endangered.

"Tahina – Malagasy for ‘blessed’ or ‘to be protected;’ also one of the given names of Anne-Tahina Metz, the daughter of the discoverer of the palm" and spectabilis from Latin, meaning notable or showy.

Large enough to be visible in satellite imagery, Tahina spectabilis, commonly known as dimaka, is an enormous 'self-destructive' palm that remained undetected by science until 2007. Its extraordinary appearance and genetic evidence indicate that this palm belongs in a genus of its own within a group of palms originally thought to be restricted to Asia. Efforts are now underway to conserve this species through distribution of seed and cultivation in botanic gardens.

Tahina spectabilis has a huge trunk, with a swollen base, and a 4 to 10 m high crown comprising about twelve fan-shaped leaves up to 5 m in diameter. Dead leaves are retained below the new growth but eventually fall under their own weight as the tree gets larger. The trunk is covered by ring scars left by the fallen leaves.

When flowering commences, the tip of the stem extends above the dense green crown, expanding into an impressive pyramidal, candelabra-like inflorescence (around 4-5 m in height) which at maturity explodes with a multitude of tiny yellow flowers.

As with all of Madagascar's wildlife the biggest threat to this palm is likely to be habitat loss. It is particularly vulnerable because it has a very small population size (estimated at 90 individuals) and a restricted range, meaning that even small-scale impacts could be potentially devastating. Since the 1970s, approximately one-third of Madagascar's primary vegetation has disappeared, mainly as a direct result of fires, logging and clearance of land for agriculture. (Dr's Rakotoarinivo, M. & Dransfield, J.)