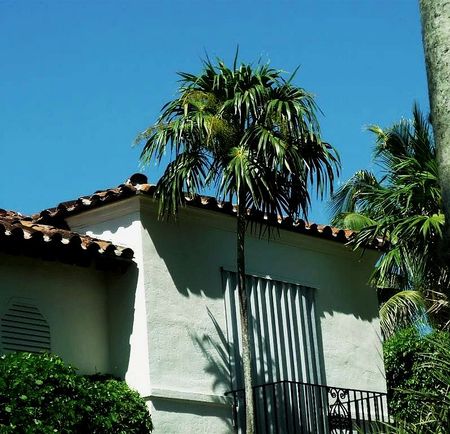 Palm Beach, Florida. Photo by Keith C. Austin
Mexico Southeast, Nicaragua. This typically solitary palm is Found mostly as part of coastal scrub habitat, but may appear sporadically in pinelands, or at the base of any tree where birds roost.

Florida thatch palm has a slender trunk, Typically 10-20 feet in height; maximum height of up to 30' takes decades to achieve. Topped with a cluster of 12-20 deep green palmate leaves, fan-shaped fronds about 2-3 feet in diameter, segments 2.5’ long, 2” wide. The fronds are supported by slender petioles (stems) and collectively can form a dense, rounded canopy. The petiole base is forked, like an upside-down V, and persists on the trunk. Each frond is rounded and its segmented leaflets are medium to dark green above with silvery gray undersides. In warm months, branched flower stalks appear among the leaves. The inconspicuous flowers along the stem are bisexual and wind-pollinated. The fruits that follow are white, round 1-1.5 inches wide, and eaten by songbirds.

The Florida thatch palm is a slender, solitary, very slow-growing, palmate fan palm. Growth averages no more than 6 inches a year. It may grow to a height of 30 feet, but it is often much smaller. It is adapted to growing in full sun or varying shade. Its canopy is dense and globular in full sun and open and airy under shade. The entire trunk of young specimens are generally shaggy with matted fibers held between old leaf bases. The trunk of many older specimens are matted at the top; the mid and lower trunk is rough and gray; the base often has a mass of tight protruding roots. Trunk diameters are normally 3—5 inches. Typically the Florida Thatch palm produces 12– 20 palmate fronds. The fronds are induplicate, circular and slightly folded. The segments are divided about halfway, split and pendant at the tip. Fronds are green above with yellow ribs, lighter green or yellow green beneath. They have a distinct pointed hastula protruding from the frond’s center. At maturity the leaf will be 4-5 feet wide on an unarmed petiole of 2-3 feet. The inflorescence is 3 feet long or more and arches downward, sometimes extending beyond the frond. The Florida thatch palm flowers all year but its peak bloom occurs in spring. The bisexual flowers are white. Palms as short as 6 feet will begin flowering. Drupes are seen throughout the year, but are more abundant in the fall. The drupes are about 1/4 inch in diameter and are also white. (lee.ifas.ufl.edu) Editing by edric.

Full sun to partial shade and sandy, very well-drained, preferably calcareous soil, that is relatively moist in the growing season and drier in winter. Palms grown in more shade are slower growing and have rangier habits. Once established, this palm exhibits fair cold tolerance, (28°F leaf damage) and is quite resilient to tropical storm winds. It is very salt and drought tolerant, making it ideal for Oceanside gardens, xeric landscapes and dry foundation plantings. Cold Hardiness Zone: 10a.

The Florida thatch palm grows well in the high pH of calcareous material. This material is frequently used for roadway and residential construction in south Florirda. It is a relatively cold tolerant species and is able to survive temperatures as low as 26°F. While tolerant of seaside spray it does not take well to being inundated by salt or brackish water.

Ecology: Thrinax radiata is found primarily in coastal scrub areas from the Caribbean to Mexico, and can even grow in exposed limestone. It is also occasionally found in pinelands in South Florida and semi-evergreen forests in the Yucatán peninsula. Its seeds are eaten and presumably dispersed by many animals including bats, spider monkeys, toucans, armadillos, and deer. Young leaves are also eaten by spider monkeys, and mature ones serve as a refuge for several bat species[6] In Florida (Elliott Key in particular), the invasive Mexican red-bellied squirrel (Sciurus aureogaster) has had an extremely negative impact on T. radiata populations. It uses palm fibers as nesting materials and consumes the palm itself, often killing the plant.

In the wild, this species almost always grows close to coastal areas where it is adapted to tolerating heavy winds, high concentrations of salt, and even drought. It naturally grows in sandy and calcareous soils where it does best in basic, high pH, soil conditions. This species is native to regions of the southern United States and the Florida Keys, western Cuba, the Bahamas, the Cayman Islands, Puerto Rico, Jamaica, Hispaniola, the eastern coast of the Yucatán Peninsula of Mexico, Belize, Honduras, and Nicaragua.

Uses: This species is commonly used as a landscaping tree along roadways and in residential areas in South Florida (zone 10). Today, it is being widely planted outside of its natural historic range in South Florida and the Caribbean because of its ability to grow under various conditions. It is used by gardeners and can be grown in containers or in arboretums, which showcase this species’ prolific inflorescences and fruit. Its common name derives from the use of its fronds in thatched roofing. Its fronds are the most used part of the palm, being utilized in broom construction, handicrafts, and food wrapping. While T. radiata's white fruit are inedible, its trunks have recently been used to construct lobster traps by fishermen in the Yucatán peninsula.

Conservation: This species is listed as endangered by the state of Florida.

"Thrinax has white berries and Coccothrinax has purple, if you ever catch them in seed." (Scott)

Thrinax radiata is a solitary-stemmed, evergreen palm, growing 1.5 - 12 metres tall. The unbranched stem can be 6 - 13 cm in diameter; it is topped by a crown of fan-shaped leaves. Some forms of this plant have a cluster of stems, with the shoots coming from a short, underground rhizome.

The leaves are often harvested from the wild, being commonly used to weave hats and other items. The stems are used as posts

Like all palms, this species grows thick and low to the ground before sending its meristem vertical, gaining the form of a slender tree. This species has no crownshaft and the canopy appears to emerge directly from the trunk. On average this species reaches a height of 20 feet. It has large compoundly segmented leaves which are 4 to 5 feet wide and 2.5 feet long. The leaves are palmate and divide into segments about halfway down their length with the leaf emerging from the petiole in what is described as a pointed hastula shape. The entire canopy consists of between 10 and 20 large leaves and on average gains only 6 inches of height per year. The shape of the canopy varies depending on its amount of insolation, with full sun specimens appearing more globular or compact, and shaded specimens having a longer, more spread-out canopy. This species can flower when the tree is only 6 feet tall. The inflorescences exceed 3 feet in length, arch downwards, and can extend below the frond. The flowers are white, bisexual, and occur year-round, with peak production in the spring. The resulting fruits, called drupes, are white and can also be seen year round.

Found on hammocks and near the shoreline of southern Florida, the West Indies, and parts of Central America, this is a small palm (30 feet) with broad, fan-shaped leaves. The crown is rounded, and the trunk less than 10 inches in diameter. The bark is gray, and often covered with dead leaf bases. The leaves may reach 4 feet in diameter and are shiny green on top, distinguishing this species from Brittle Thatch Palm. The flowers are borne in long, branched clusters (to 4 feet), and are cup-shaped with short stalks. This palm is endangered in Florida.

"Young palms of this species are very attractive, but should really only be grown in humid environments- this palm struggles even in the zone 10a in southern California but does great even in marginal areas of Florida which are colder, but a lot more humid. I have tried with this palm and even though I still have some surviving plants in the ground after 5 years, it is not a good palm for me... it literally seems to shrink every year- stem gets a bit narrower, and leaves much smaller... Oh well. Commonly sold in clumps in nursery outlet stores as indoor palms, but it's not too good for that use, either. Native of Florida and the Caribbean islands. Solitary fan palm with large, nearly circular deeply split leaves that droop after the split. THrinax palms look a lot initially like Coccothrinax palms but the trunk looks very different- this genus has split leaf bases, while Coccothrinax palms do not." (Geoff Stein)