An overview of Thrinax parviflora Swartz By Jose A. Grassia 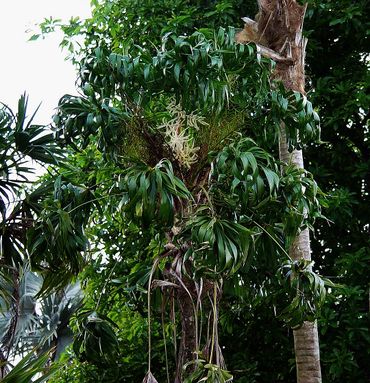 Thrinax parviflora subsp. parviflora. Photo-FTBG.
of the Thrinax alliance. The genus is easily distinguished by the splitting of the base of the petiole in the region of the sheath.

Palms of the species Thrinax parviflora occur only on alkaline substrate, specifically coralline sands or limestone outcrops, from sea level to about 900 meters elevation. (Jose A. Grassia)

Endemic to Jamaica are restricted entirely to exceedingly well drained sites far from the influence of salt spray. Thrinax parviflora was described as “The commonest member, of the undergrowth, which although capable of growing much taller, does not do so in this habitat, except where there is an opening in the canopy.” The author has included the species, as the principal representative of the Palmae, among the five most important families of arborescent species, in the Dry Evergreen Thicket. Apart from the presence of the “thatch,” the formation is characterized by the absence of herbaceous ground cover and terrestrial ferns. (Jose A. Grassia)

The substrate is generally deeply eroded, bare rock with occasional pockets of shallow soil, containing very little humus. Dry Evergreen Thicket is a widespread formation on most of the hills and ridges of low to middle elevations, from sea level to about 900 m, where the limestone is naturally exposed. T parviflora grows naturally at altitudes between 100 and 900 m asl, with an annual rainfall varying between 1000 and 2500 mm. (Jose A. Grassia)

Small to medium palm, 1-10 (-13) m high, caudex often very slender, 5-14 (-15) cm in diameter, internodes 1.0-6.5 cm apart on lower trunk. Leaf sheath 45-70 cm long, petiole 50-145 cm long, 1.2-2.2 cm wide; hastula triangular or rounded acute 0.5-3.4 cm long, may become tubular with expansion and folding of blade, abaxially with a distinct ridge 0.1-0.5 (-1.0) cm long or a triangular projection 1.0-1.7 cm long; Leaf blade when expanded very variable, circular and flat on young plants and in the shade, the basal lobes folded up away from the petiole when in the sun, and on older plants, or variously folded and contorted on tall slender plants, abaxial surface with microscopic widely scattered scales; segments rhomboid 37-57 in number, 40-90 cm long, 2.8-6.0 cm wide, widest beyond point of fusion, the middle two or three segments always fused for a greater length but rarely totally. Inflorescence erect to arching, 40-175 cm long, bracts greenish with brown comppressed scales, each inflorescence with 7-22 branches in the proximal half and in the distal half with 17-45 branches, ivory to yellowish at anthesis, densely puberulous to glabrescent or glabrous, several of the lowermost branches occasionally forked or highly branched but subtended by a narrow triangular bract. Flowers ivory to yellowish, fragrant, 32-60 per branch; stamens 5-10 per flower, anthers linear to oblong 1.2-4.0 mm long; infundibuliform stigma oblique to lateral, ciliate; developing ovary papillate to granulate Fruit papillate to scurfy granulate, tan before maturation, become white and smooth or slightly punctate, 6.4-7.3 cm in diameter; seed tan to dark brown 5.4-6.2 mm in diameter., normally completely perforated by the testa. Haploid chromosome number, n = 18. (Jose A. Grassia)

Key to the Subspecies of Thrinax parviflora

Among the many Thrinax, this species from the mountains of Jamaica is one of the prettiest. It grows a slender, smooth trunk topped by an open crown of smallish, very thick and leathery fan leaves with curiously twisted and curled, grass green segments. This robust palm will thrive in tropical as well as subtropical climates and tolerates an occasional light frost. It does well even on poor, rocky, or sandy soils, as long as it is well drained, and, like most Thrinax, it adapts well to coastal exposure. (RPS.com)