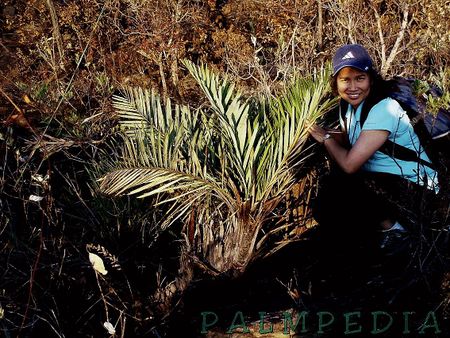 This small palm is native exclusively Serra do Cipo state of Minas Gerais, Brazil, where it grows in rocky soils at high elevations in the rock field habitat - a unique type of vegetation present only in central Brazil. Normally, Syagrus duartei form an underground stem rarely reaches 2 m in height and has a stellar appearance and neat glass, comprising rigid leaves, somewhat feathery, glaucous, oriented upward. (RPS.com) Editimg by edric.

Photo is of Syagrus duartei in habitat with Suchin Marcus, after a fire had gone through the area a few weeks before.. this one growing sideways and winding with a meter plus trunk...Many casualties but they are much like a cycad and flush back and quite resilient ..we saw six or seven habitats of Syagrus and Butia that had been burnt and many dead palms but the ones near the rocks and the tough one survive.. (see photo)