Sommieria leucophylla is endemic to Indonesian 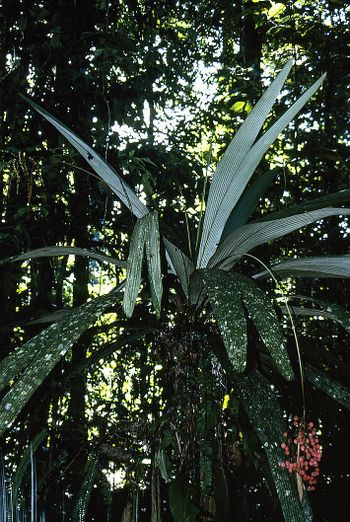 An attractive and rare understory palm with silver-backed leaves and a trunk attaining 3-4 meters (12 ft).

This species comes from Irian Jaya and looks similar to S. Affinis from Papua New Guinea. Most of the time this form has 2 lamina on each side of the petiole it also has an entire leaf form the whole plant has a bluish white tinge to a somewhat dark green upper leaf underside silvery white. (Utopia Palms & Cycads)

Beccari (1877, 1914) differentiated S. leucophylla from S. elegans on the colour of the leaves, leaf segmentation and the size of the inflorescence (more 'robust' in S. elegans) and then he differentiated S. affinis from S. leucophylla by its smaller size and by the fronds being doubly-toothed at the tips. Moore made an unpublished key in 1956 to separate the three species. In this key, Sommieria elegans is separated from the two other species based on leaves being large, long-petioled, dull but not pale below, and S. affinis from S. leucophylla based on the tips of the segments. Morphological plasticity that occurs in Sommieria displays gradual and often overlapping variation and this has influenced the species concept used in this revision, which is broader than that used by earlier authors. The narrow species concept used in the genus reflects limited information obtained from single collections. No disjunctions in variation occur that would allow the consistent separation of three species in Sommieria as recognised by Beccari and followed by other authors (e.g. Ferrero & Dowe 1994); the distinguishing characters used are almost all vegetative characters that, now that we have a good number of specimens, can be seen to display a wide range of variation. The shape and size of the fruits and seeds varies greatly within individuals and populations. Because of this, fruit and seed shape and size is not considered to be of value in the delimitation of species. Ferrero (1997) proposed new forms of S. affinis and S. leucophylla (without providing formal names), after looking at pictures and photographs and speculating that S. elegans is very different by being larger in all its dimensions (size of leaves, thickness of stem, length of peduncle, etc.). The decision in this study to recognise one species only, is based on detailed examination of all available herbarium specimens and careful observation in the field. (Ch.D. Heatubun. 2002)/Palmweb.

This species is best suited to the tropics but could be grown in a hot house over winter subtropics only growing to 2m high likes regular watering and fertilize once a year temperature 10.C to 35.C. (Utopia Palms & Cycads)

A little-known New Guinean forest-floor palm with bronzy indumentum on the undersides of its stiff, pleated, bifid fronds. This specimen is in Cairns Botanical Gardens. It is related to Pelagodoxa henryana, which is native to the Marquesas Islands in the Central Pacific. (tanetahi)

The genus Sommieria used to contain three species, all native to northwestern New Guinea. In 2002, however, botanist Charlie Heatubun joined the three into a single species, Sommieria leucophylla. It is a variable, smallish undergrowth palm native to wet lowland rainforests. It grows with an underground or shortly emergent, solitary trunk, about 3 cm (1 in.) in diameter. The crown holds numerous, usually entire, deeply bifid leaves that are dark green above and silvery white to golden below. It is closely related to Pelagodoxa, with which shares the same curious, warty, albeit much smaller fruits. In cultivation it is still very rare. It is slow growing and requires a protected spot in the tropical garden with ample moisture. Even though under botanical criteria, the reduction to a single species makes sense, horticulturally the three original species are somewhat distinct. Sommieria leucophylla in the original sense, as offered here, is found in Western New Guinea (formerly Irian Jaya). It differs by usually having two leaflets on either side of the leaf midrib, which are dark green above with a bluish cast. The leaf underside is a superb silvery white. It grows to about 2 m (6 ft.) tall. (RPS.com)