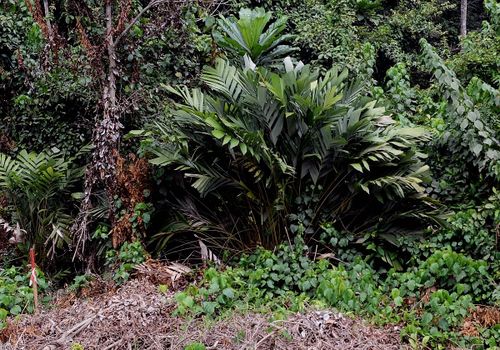 Gabonese Republic (Gabon), Africa. Photo by Ken Johnson.
Liberia, Nigeria, and Zaire. Sclerosperma mannii appears to have a rather disjunct distribution with a population in Liberia and from southeast Nigeria southward to Congo and as far east as the border area of Congo and Rwanda. The species was reported to be present on the island of Bioko by Guinea López (1946) quoting Gómez Moreno, but without a specimen citation (no specimens to corroborate its presence on this island have been received from MA). Shrub layer in lowland evergreen rainforest, ranging from forest just behind the mangrove swamp forest, through periodically flooded forest, to valley bottom forest at higher elevations, persisting in secondary growth; 0 – 1,400 m. elev.

Sclerosperma dubium was described on the basis of a carpological collection in the Hamburg museum. Beccari stated that he initially considered the specimen to belong to S. mannii. However, upon closer examination, he considered it to be sufficiently different with respect to the reticulation on the kernel and the position of the embryo. The botanical museum in Hamburg houses three samples collected by Wölfert, all bearing the same label information, one bottle contains a single fruit with the kernel cut lengthwise that is obviously well developed, 20 _ 25 mm.

Etymology: The specific epithet (species name), was named after the collector of the type, Gustav Mann (1836 – 1916), a Kew gardener and plant explorer.