Satranala decussilvae is Endemic to northeast Madagascar where it is known from five scattered sites between Soanierana Ivongo and the Masoala Peninsula. this palm is found at a single site within the Mananara Biosphere Reserve, in the northeast of the island, and in a few scattered populations in the Masoala National Park, 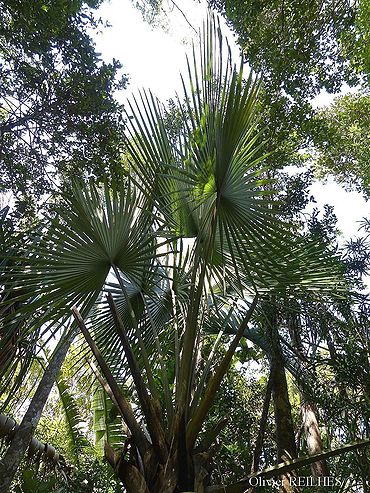 known from a single site. Occurs in humid lowland forest on shallow soils overlying ultramafic rock or quartzite. Recorded from 10 to 600 m.

As the seed germinates the cotyledonary stalk pushes its way out of the endocarp which gapes slightly along the major crest, the endocarp thus appearing somewhat like a walnut with two valves; no other palm known to us germinates in this way. (J. Dransfield and H. Beentje. 1995)/Palmweb.

"Not difficult to grow from seeds and spouts in 2- 3 months. Requires deep pot with good drainage. Initial growth is quite rapid at least for palms." (kiloa)

One of the most exciting discoveries made during this project. The first fan palm from the rain forests of the East Coast, looking quite like a Bismarckia, but with totally different fruit. The endocarp is flanged on the outside, with straight and sinuous wings. It is tempting to speculate on the adaptive significance of this extraordinary structure. We suggest the endocarp may be adapted to being swallowed by large birds (such as the now extinct Aepyornis) - a theory which, of course, cannot be tested. However, it is worth noting that very heavily sclerified and sculptured endocarps are found in Ptychococcus and Brassiophoenix (Uhl & Dransfield 1987) and in two species of Licuala (M. Forrero, pers. comm.) in New Guinea, where they appear to be adapted to dispersal by cassowaries, extant relatives of the extinct Madagascar elephant bird. (J. Dransfield and H. Beentje. 1995)/Palmweb.

Etymology: The specific epithet is from the Latin meaning; 'jewel of the forest'.

Uses: Seeds of this species are harvested and exported abroad for the international horticultural market. The leaves are also harvested for thatching.

Conservation: Endangered. Endemic palm of northeast Madagascar. The extent of occurrence is 3,248 km² and the area of occupancy is 86 m² and the species is known from five locations. The population comprises about 200 mature individuals and is severely fragmented. There is continuing decline in the extent and quality of the habitat, especially in the Soanierana Ivongo and Rantabe areas. Leaves continue to be harvested for thatching at Tampolo, Masoala, despite the locality being within the National Park. Seed is also harvested for the internal horticultural trade. This species therefore meets the requirements for listing as Endangered. (J. Dransfield and H. Beentje. 1995)/Palmweb.

This species is threatened by habitat loss through clearance for shifting agriculture and logging; The harvesting of the leaves for thatching and the seed for international trade are also threats to this species. Protected in Mananara Avaratra and Masoala National Parks. Control and monitoring of the harvest and trade is required. Rakotoarinivo, M. & Dransfield, J. 2012. Satranala decussilvae. The IUCN Red List of Threatened Species 2012: e.T38696A2883367.

Endemic palm of northeast Madagascar. The extent of occurrence is 3,248 km² and the area of occupancy is 86 m² and the species is known from five locations. The population comprises about 200 mature individuals and is severely fragmented. There is continuing decline in the extent and quality of the habitat, especially in the Soanierana Ivongo and Rantabe areas. Leaves continue to be harvested for thatching at Tampolo, Masoala, despite the locality being within the National Park. Seed is also harvested for the internal horticultural trade. This species therefore meets the requirements for listing as Endangered.

"Extremely rare and sought after large fan palm from Madagascar- leaves deep in the forests (what forests are left). Very slow growing palm, even in the tropics. Looks a bit like a green Bismarckia palm. Only seen one in my life and it was a seedling. Will probably never see an adult." (Geoff Stein)

It has been hypothesised that the unusual ridged seed coat that this palm possesses may have evolved in the same way to the similar adaptation of some New Guinea palms. These species have ridged seeds so that they are unharmed when the fruit is eaten, and therefore dispersed, by the flightless cassowary bird. A large, flightless bird also existed on Madagascar until the 17th Century; it was known as the elephant bird (Aepyornis maximus) and may have been more than three metres tall. It is possible that the elephant bird, or a now extinct mammal, dispersed the Satranala decussilvae seed in a similar way, and that the bird or mammal was a necessary part of this palm's life cycle. (eol.org)

This unusual palm tree was first discovered by the Royal Botanic Gardens, Kew in 1991 and was distinctive enough to be placed in its own genus. The leaves are fan-shaped and the genus name Satranala actually means 'fan palm of the forest' in Malagasy. This species is a solitary, dioecious tree with a hard, straight trunk supporting around 20 - 24 fan-shaped leaves. The most exciting and intriguing feature of this palm however, are the seeds, the inner coat of which carries ridges and flanges that are unique amongst palms in the region, whose seeds are generally smooth. These seeds are so unique in fact, that they resemble (albeit faintly) only a few other palm species on the far-off island of New Guinea. (eol.org)