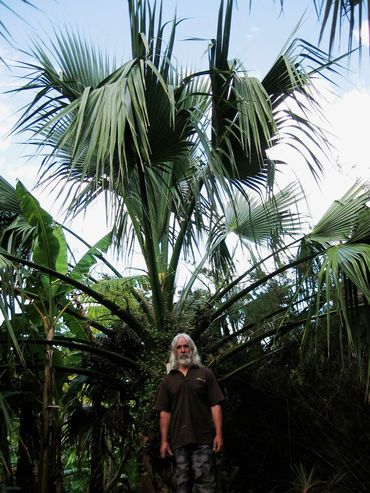 New Zealand. Germinated in the mid-90's. Photo by richnorm.

Known for its enormous, bluish green, fan-shaped fronds and its remarkable cold hardiness, this hybrid from the vicinity of Riverside, California, is also among the fastest growing palmettos. Eventually forming a medium to tall, single-trunked palm, it may have either Sabal bermudana or Sabal domingensis in its lineage.

Grow Riverside palmetto in full sun and fertile, well-drained soil. It does well in hot and dry or cool and damp conditions. It tolerates temperatures of minus 11 C (12 degrees F). Although fast-growing for a Sabal, it is still slower than many palms. Warm soil and summer irrigation may hasten its growth. Use it as an accent plant in a mixed border, or as a specimen in a lawn to bring a tropical look to temperate gardens. It also does well in large containers.

"Sabal riverside is just a specific stable 'form' of a species of sabal just like blackburniana is. No one has come up with a good analysis as to which one, it just stays true to its form. I purchased both of these from Gary Wood in Fallbrook. My riverside species was way overgrown and quite unhealthy when I got it from his closeout sale. I am not gonna complain, $4 for a 5 gallon rootbound sabal is really a give away. But it's taken a full year to get going. It's picked the middle of Winter to start growing again, now that's a pretty good sign. Note, unlike in the post referred below, I see significant differences even as seedlings between riverside, causiarum, blackburniana and dominguensis. They have totally different growing forms leaf wise and leaf texture wise." (Dr. Axel kratel)

"Here's the original story from Phil, which you can find if you search for 'sabal riverside story' See http://www.palmtalk....abal-riverside/" (Dr. Axel kratel)

"Ed Moore (from San Diego, past President So Cal Chapter IPS) is now about 90 years old. He told me that when he was young, it was almost impossible to get different palm trees. About fifty years ago he visited a private botanical garden (owned by a wealthy individual) and saw this huge blue-green Sabal. He collected seeds and sold several hundred of them. He called them "Sabal-Riverside" at the time and put a tag in each plant. The original plant survived for a while and as I recall the site became a public garden (? Wright Park) for some time but was eventually plowed under. The palm was apparently lost or moved. Ed told me after a decade or two, people just started calling it Sabal Riverside as if it were a species. I've got a huge seeding specimen in my yard. The seeds are about the size of a small marble with the fruit, which is black. It's trunk is thick, the leaves are quite large, but the petioles are not real long; perhaps 6 feet. The photo from RPS above looks like it, but Maxwell's palm is too stretched out in the petioles. I question whether it's the real thing. If I can get around to it, I'll shoot a few photos some day. There's several in Morley Field next to Balboa Park in San Diego. That's where most of the seed brokers get their seeds." (Dr. Axel kratel)

"The theory is that sabal riverside is or was a single tree somewhere in Riverside that is super fast and super hardy (15F and below). It is some sort of sabal hybrid, most likely involving bermudana, but others claim it's of Cuban descent or elsewhere in the Caribbean. I am pretty sure that most sabal riverside being propagated these days are second or third generation offsprings, so if the original tree was a hybrid, how come the offsprings don't change?" (Dr. Axel kratel)

"Nobody really knows, and no one has taken the time to try to get the actual origin documented properly. But I think the hybrid theory is wrong, or else it wouldn't be so consistent from generation to generation. Based on the variety of forms of sabals within single species, this sabal is probably just another form of bermudana or causiarum. It's the same issue with sabal blackburniana, which is thought to be either a different form of palmetto or a different form of dominguensis (I would side with the latter one.)" (Dr. Axel kratel)

"Looking at the size of Riverside and its hardiness, it's probably a form of causiarum. This photo of Riverside is one that impresses me the most, it's taken at Maxwell Stewart's house in Mobile Alabama. From the trunk form, it almost looks like a form of dominguensis." (Dr. Axel kratel)