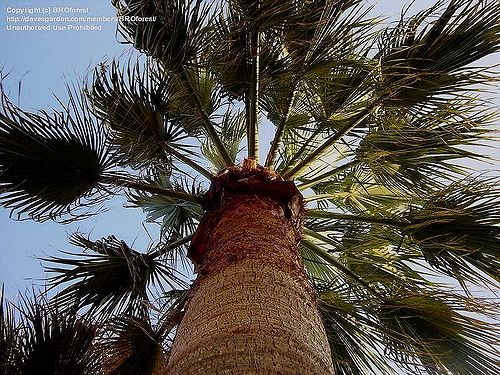 exist in two parts of Texas.

Sabal mexicana (the Texas plant was formerly separated as Sabal texana): Increasingly, it is being used in landscapes in Texas. It looks similar to S. palmetto but is shorter, tends to have a stouter trunk and has a larger fruit that also has a flattened sperical shape. The Flora of North America says that Sabal mexicana fruits are 14.8 millimeters or more in diameter (compared to 13.9 mm or less for S. palmetto.) (southeastgarden.com)

Stately and robust, Texas Sabal Palms grow up to 50’ tall with a solitary trunk, 8-32” in diameter. The canopy of a mature Texas Sabal Palm Tree may be 8-25’ across. The gray trunk has closely spaced annular rings. Usually part of the trunk remains covered with old leaf stem “boots,” that often split at their bases. These persistent boots form a characteristic crosshatch pattern on the trunk. The petioles (leaf stems) are smooth and completely thornless and may be up to 15’ in length. Texas Sabal Palm Trees have 10-25 fan-shaped leaves ranging in color from deep emerald green for palms in shade or part shade, to lighter green for palms receiving more sunlight. Each leaf has 80-115 leaflets with characteristic threads unraveling along the margins. The Palm Tree's leaves have prominent and strongly downward arching costas (leaf midribs) which give them a three-dimensional effect. Texas Sabal Palms may flower when very young, often blooming when the trunk is small or even nonexistent. The Texas Sabal Palm Tree produces small white flowers in a branched inflorescence about as long as the leaves. Male and female flowers are borne on the same plant. The fruits are round-oval and black when ripe. The Texas Sabal Palm can be distinguished from other palmate-leafed palms by its long, smooth, nonthorny petioles and the long, downward arching costas. Editing by edric.

Texas palms tolerate drought and adapt to a wide variety of soils including those that are neutral, acidic, clayey, wet and slightly alkaline. Texas palms thrive in a humid atmosphere in rich loamy, moist and well-drained soils. Texas palms are traditionally slow growers, however regular fertilization with palm grade fertilizer promotes maximum growth. A balanced slow release palm fertilizer with minor elements, e.g., an 18-18-18, may be used during the growing season. Potassium nutritional deficiencies can develop on older leaves and may show up as translucent yellow or orange necrotic spotting. Mineral supplements should be administered in appropriate recommended amounts to prevent or treat such deficiencies. Texas palm is resistant to lethal yellowing disease.

Hardiness: USDA Zones 8 - 11. Mature and established Texas palms can tolerate occasional temperatures down to 12ºF (-11ºC), with minor or no leaf damage. More cold hardy data on the Texas palm is expected as its cultivation becomes more widespread. Some palm enthusiasts are reporting success with growing Texas palm in USDA Zone 7b.

Propagation: Texas palm may be propagated by seeds. Fresh, ripe seeds have been reported to have a 60% germination rate after four weeks of planting. Germination of fresh seed usually takes place in two weeks to four months at 75ºF (24ºC). Seeds seem to have maximum viability if germinated within 16 weeks after the fruit matures. Germinating seeds should be protected because Texas palm seeds are a particular favorite of many birds and squirrels. Germinating seeds may form a long single root some time before forming a shoot.

Cold Hardy to 16 - 18 degrees (lower depending on the age and growth of the cold hardy palm tree), The Texas palm (Sabal texana or S. mexicana), also known as Texas palmetto, Rio Grande palmetto, palma real, and palma de Micharas, is a native of the lower Rio Grande valley. It is a stocky palm that grows to a height of twenty to forty-eight feet and has large blue-green, fan-shaped leaves that form a thick, rounded crown.

Its local common name, "Palma de Sombrero," suggests one of the uses of this handsome species in its native Mexico, where it is one of the most common and widespread of all the palms. Its general range is very large also, extending from Texas right down through Mexico, and continuing through central America as far south as Nicaragua. Its trunk is, as a rule, covered with old leaf bases giving it a rather stout appearance, and it carries a dense crown of dark green, strongly arching leaves. Altogether a bold, robust and very cold hardy species. (RPS.com)