Sabal domingensis is found from northwest Haiti to the central Dominican Republic, 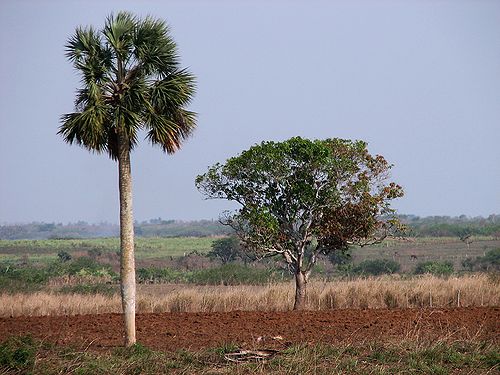 Hispaniola palmetto, Palma Cana (Sabal domingensis) and Mango tree in a dry savannah near Varadero, Cuba. Photo By lezumbalaberenjena
and is also present in Cuba. It is usually found in secondary vegetation between 100 and 1,000 metres (328 and 3,281 ft) above sea level.

Sabal domingensis is a bigger burlier version of Florida's native cabbage palmetto (Sabal palmetto) to which it bears an otherwise close resemblance. The Hispaniola palm, as it is commonly called, has a single trunk that grows straight and erect to a height of 60 ft (18 m) and possibly taller. The trunk is massive, about 2 ft (60 cm) in diameter and usually with the upper several feet covered with interlaced leaf bases, left behind when the petioles break and the leaves fall. These eventually detach to reveal leaf scar rings upon the smooth light brown trunk. The crown is larger than that of S. palmetto and more open due to the larger leaves. The petioles (leaf stems) are about 5 - 6 ft (150 - 185 cm) and the leaves themselves are about 4 ft (125 cm) long. (floradata.com) Editing by edric.

The costapalmate leaves are dull green and cut with deep incisions about halfway to the center dividing the leaf in two. The tip of each segment is split in two, each becoming threadlike at the end. These droop toward the ground providing a graceful charm to an otherwise hefty recurving appearance. Hispaniola palm leaves also have fibers hanging from the sinuses (indentations) that tend to persist throughout the life of the leaf, although with time they tend to twist and turn into a tangled ball. The flower stalks are about 3 ft (91 cm) long and appear in spring and are held within the crown of leaves. Each stalk divides into numerous branches that hold the small, 0.25 in (8 cm) creamy white flowers. It is common for young palms to flower - even before they form a visible trunk. The black seeds are spherical, often flattened on the end and 0.5 - 0.75 in (15 - 23 cm) in diameter. (floradata.com)

Sabal domingensis is a fan palm, and costapalmate, with solitary, very stout stems, which grows up to 16 metres (53 ft.) tall and 60 centimetres (24 in.) in diameter. Plants have 20–30 leaves, each with about 90 leaflets. The inflorescences, which are branched, arching and at least as long as the leaves, bear pear-shaped, black fruit. The fruit are 1–1.4 centimetres (0.4–0.6 in.) in diameter; fruit size and shape are the main characteristics by which this species differs from Sabal causiarum. Editing by edric.

Sabal domingensis, grows well in hot dry inland areas, as well as tropical climates. It can reach a height of 60 feet, so give it plenty of room, although it is slow growing and does not seem to mind cool winter temperatures.

Hispaniola palm is easy to grow on most soils except those that are continually soggy. It has a preference for light sandy soils. Prone to Potassium deficiency in SoCal. Fertilize twice yearly in spring and summer for faster growth. Light: Thrives in bright, sunny, exposed areas. Moisture: Drought tolerant. Hardiness: USDA Zones, 9 - 10. May also be hardy in some parts of Zone 8. many young palms have weathered 20º F. (-6.6º C.) with only minor leaf damage - and seem to be mostly resistant to the fungus diseases that strike after a hard freeze. Propagation: This palm is easy to propagate from seed. Germination time is 2 to 6 months.

Uses: The leaves are used for thatch and to weave a variety of items including hats, baskets and mats.

Another difference is that the petioles of S. maritima are densely covered with light-colored scales and appearing whitish or tan with a small, triangular to square-shape ligule at petiole base. S. maritima also has a rachillae with very crowded flowers, whereas the flowers are not crowded much in S. causiarum. Donald Hodel also mentions that Sabal causiarum can be distinguished from S. domingensis and S. causiarum by the presence of conspicuous, large, tan, flap-like ligules at petiole base. This characteristic is not mentioned in Scott Zona’s 1990 monograph of Sabal.