Sabal causiarum has a natural range that includes Puerto Rico, the island of 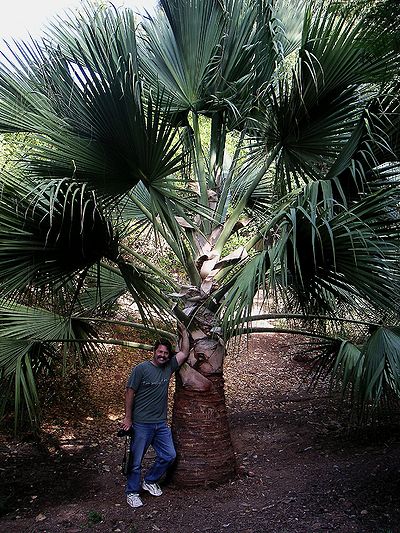 Sabal causiarum is a fan palm with solitary, very stout stems, which grows up to 10 metres (33 ft) tall and 35–70 centimetres (14–28 in) in diameter. Plants have 20–30 leaves, each with 60–120 leaflets. The inflorescences, which are branched, arching or pendulous, and longer than the leaves, bear globose, black fruit. The fruit are 0.7–1.1 centimetres (0.3–0.4 in) in diameter; fruit size and shape are the main characteristics by which this species differs from Sabal domingensis. Editing by edric.

Uses: As is reflected in both the common and scientific names of the species, the leaves of Sabal causiarum are used in the manufacture of hats. In 1901 Orator F. Cook described a hat-making industry centered in the village of Joyuda in Cabo Rojo, which made "large quantities" of hats from the leaves of this species. According to Andrew Henderson, this industry had declined considerably by the late 1900's. Leaves of the species are also used to make baskets, mats and hammocks, and older leaves for thatch. It is also planted as an ornamental or street tree due to its "massive, stately appearance."

Etymology: It is S. causiara as opposed to S. causiarum, by the way, according to the international laws of nomenclature where the feminine ending is required for the specific name if present in the generic name (as in S. bermudana, S. mexicana, S. uresana, S. etonia etc.). (Rare Palm Seeds.com)

Another difference is that the petioles of S. maritima are densely covered with light-colored scales and appearing whitish or tan with a small, triangular to square-shape ligule at petiole base. S. maritima also has a rachillae with very crowded flowers, whereas the flowers are not crowded much in S. causiarum. Donald Hodel also mentions that Sabal causiarum can be distinguished from S. domingensis and S. causiarum by the presence of conspicuous, large, tan, flap-like ligules at petiole base. This characteristic is not mentioned in Scott Zona’s 1990 monograph of Sabal.

This palm is distinguished from other Sabals by its massive smooth gray trunk which can grow up to 4 ft (1.2 m) in diameter! Most Sabals retain their old leaf bases on the trunk, creating a textured crisscross or "cabbage leaf" pattern instead of a smooth trunk. The leaves of Puerto Rican hat palm are large, usually about 6 ft (1.8 m) long and just as wide. They are costapalmate, which means the petiole, or leaf stem, extends into the leaf. The leaves are deep green in color and are deeply divided to about half their length into several segments which may droop at the ends. The Puerto Rican hat palm forms a dense canopy of about 40 leaves. As the older leaves droop to 45-90 degree angles from the trunk, they turn brown, die and fall off. Many other Sabal species, like Florida's native cabbage palm (Sabal palmetto) tend to retain a 'hula skirt' of dead leaves about its trunk. (floradata.com)

"Sabal causiarum is one of the biggest sabals with the largest fans. Sabal causiarum happens to also be one of the hardiest of the bunch, and will not sustain any leaf damage even with temperatures in the low 20's. Out of all the Sabals, causiarum has proven itself in the cooler West coast climate as it grows successfully even in Seattle. If you have to pick only one sabal to grow in Northern California, causiarum is probably your safest bet." (Dr. Axel kratel)