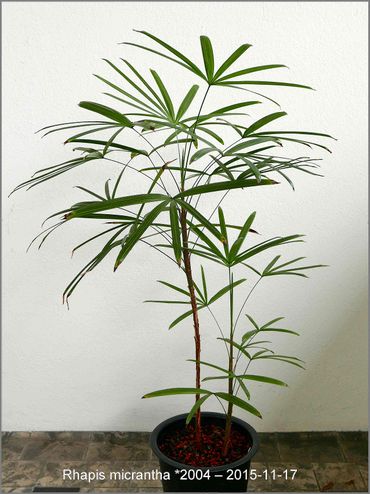 R. micrantha is a species that is similar to R. excelsa differing in that the six to ten leaf segments are divided to the junction with the petiole. Individual leaf segments are up to 250mm long and 40mm wide, conspicuously ribbed, and with pointed tips. The leaf sheaths fibrous margins are held flattened to the canes, not ruffled up as in R. excelsa. The inflorescence is interfoliar and branched to second possibly third order with small flowers. The fruit is also similar to R. excelsa but are larger being 8-9mm in diameter.

This species can be recognized by the few segments that split close to the blade base and the inflorescence bracts and rachis on the male specimens with tomentum, contrasting with the glabrous rachis and almost completely glabrous bracts on the female inflorescence. Fruit is said to be white when fresh (Beccari 1910). The male inflorescences examined had more rachillae than the female ones giving a more dense appearance. This species most closely resembles R. excelsa; it differs from it in having a neat leaf sheath, tightly sheathing the stem, with coarse outer, slightly flattened fibers and finer inner ones at maturity, smooth adaxial segment ribs, not being brown papillate, segments tapering at both ends, all segments splitting closer to the blade base, male rachis and bracts with much tomentum and PALMS Hastings: Revision of Rhapis Volume 47 (2) 2003 69 stamens being broad but not keeled. There were no mature female flowers or fruits available for study, but those on Bon 2345 (FI) are described by Beccari (1910,1931) as “flowers prolonged at the base [drawing (1931) indicates 5 mm long and 2 mm wide], into a long columnar solid base, upon which rest the carpels” with fruit 8–9 mm diam. This long receptacular-stalk contrasts with the short receptacular-stalk (to 2 mm) of R. excelsa. An illustration of the flowers of R. P. Bon 2345 (P) and a photograph of the whole specimen were published in Beccari (1931), and so this specimen was chosen by the author as lectotype. Recollection of this species from Vietnam and Laos, especially of female plants, is necessary to gain a better understanding of its delimitation. (L. Hastings, A Revision of Rhapis, the Lady Palms. 2003)/Palmweb. Editing by edric.