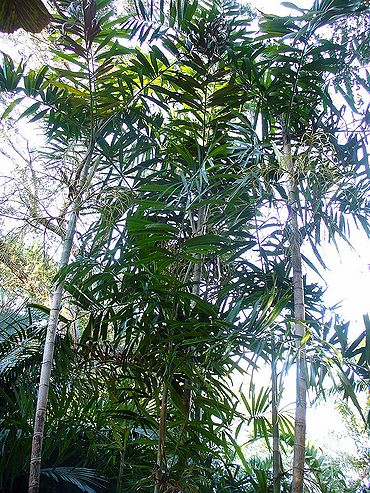 A very easy and fast growing palm for tropical and subtropical gardens.   The clustered, compact trunks grow to about 4 to 8 metres tall but often even to 10 metres. Some specimens of Ptychosperma microcarpum may be solitary. The crownshafts are olive-green, silvery, sometimes almost white. Editing by edric.

Conservation: Ptychosperma microcarpum is assessed as Least Concern. The species has a restricted range and is only known from Central Province, Papua New Guinea, where its total extent of occurrence (EOO) is approximately 2,440 km2. There have been many collections of this palm from the 1960s-1970s, although few recent collections are known. Further surveys in the region are encouraged to determine the status of the populations. This species is currently in a relatively stable ecoregion however, potential threats which may impact on its habitat in the future include the extension of the highway from the capital, Port Moresby, through to Milne Bay which will increase accessibility of the coastal plain south of the Owen Stanley Ranges, opening this extensive forest area to exploitation (WWF 2001). The range of this species overlaps with protected areas such as Paga Hill National Park Scenic Reserve and Moitaka Wildlife Sanctuary. It is not listed on CITES and seeds from this species are not known to have been collected for ex situ conservation purposes. This palm is cultivated in the Lae Botanic Gardens and Fairchild Tropical Botanic Garden. Few recent collections are known. Surveys of the region are encouraged to determine the status of the population. (ICUN Redlist)

"This is a clusterig OR solitary palm from New Guinea with slightly shorter leaflets than most other Ptychospermas, but a bit of cold tolearnce, too, as many southern Californians are growing this species along the coast." (Geoff Stein

A rather tall, clustering species from montane rainforests in Papua New Guinea, with slightly plumose leaves composed of many narrowly wedge-shaped leaflets, reminiscent of Normanbya or Wodyetia. A great, very easy and fast growing palm for the understorey in the tropical garden and an excellent and elegant houseplant. (RPS.com)