The Darwin Palm is only found in eight small rainforest patches east of Darwin, 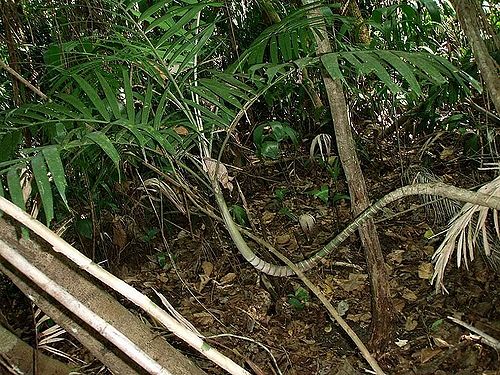 Ptychosperma bleeseri in the wild. These are growing in the Darwin area, in areas where there is permanent moisture. They occur alongside Carpentaria acuminata and Livistona benthamii in rainforest patches. This particular stand was in the Howard Springs area just south of Darwin, but still in the outer suburbs. Photo by Daryl O'Connor
within the Adelaide and Howard River system. It occurs over an area 30 kilometres long by 20 kilometres wide. Three of the eight rainforest patches occur within the Black Jungle Conservation Reserve, with the remainder occurring on freehold or pastoral lease land.

The Darwin Palm is a slender palm that grows up to 12 metres high. It has multiple green trunks that are only 3-6 centimetres wide, and feathery fronds with leaflets that grow up to one and a half metres long. Flowering spikes are produced in the dry season, from April to August, with the main fruiting period between August and December. (Australian Government Department of the Environment)

A sparse, clustering palm, of the monsoon forest depths, up to 12 tall, its long thin green stems, 3-6 cm in diameter frequently 'hang about' amongst other vegetation for support, or simply fall on the ground. Pinnae are evenly arranged on the few flat leaves, rising from a green crownshaft. Red fruit are very few and ripen sporadically, even cultivated specimens yield a scant handful at a time.

De-fleshed and planted in shallow trays, their germination rate is excellent, seedling appearing in 4 or 5 months. Standard horticultural practice suits P. bleeseri, a slow release fertilizer can be given at every move to a larger pot. Two years growth in the nursery area produces a 1.5 m suckering specimen, its dark green pinnae lying flat and even up the rachis. Sun hardened palms can be planted in almost full sun, a much shorter, robust plant will result. Three or more mature stems and many basal suckers are common in cultivated specimens. Irrigation, fertilizer and mulch are necessary. Cold Hardiness Zone: 10b

Ptychosperma bleeseri is a slender clumping palm endemic to rainforests in the Northern Territory of Australia and is listed as nationally endangered (EFN 1993). The species is known from eight rainforest patches all of which are wet, spring fed forests located on the margin of the Adelaide River floodplain or on the Howard River system to the east of Darwin (Barrow et al. 1993). The extent of the species range is 30 km long by 20 km wide and the total area of occupancy is 40 ha.