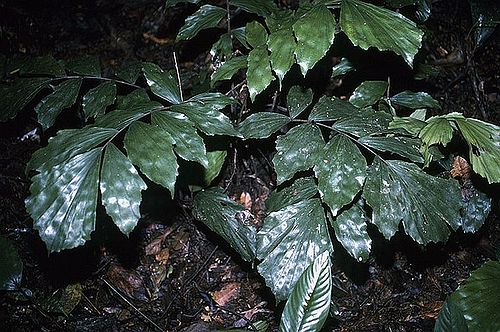 Near Campo, Cameroon. Photo by Dr. John Dransfield, Royal Botanic Gardens, Kew/Palmweb.
Podococcus barteri is distributed from Nigeria to DR Congo and Cabinda (Angola), never more than 200 km inland. Podococcus barteri occurs from sea-level up to 700 m altitude in areas with an average annual rainfall of 1500–2400 mm. It is found in the undergrowth of evergreen forest, and in relatively dry locations in swamp forest and on river banks. It persists in logged forest but is absent from young secondary vegetation.

Uses: In Gabon the leaves are used for covering temporary huts when leaves of more desirable species are not available. The leaf rachis is used for weaving fish-traps and the whole rachis is used as a fishing rod. In Equatorial Guinea the leaf base is used as a chew stick to clean the teeth, and in Cameroon the beaten stem is similarly used. The stems are used for making furniture. The fruit pulp and the fresh seeds are eaten. (prota4u.org)