Endemic to Phuket. Habitat: hill forest, at 150 m and above, population localized, 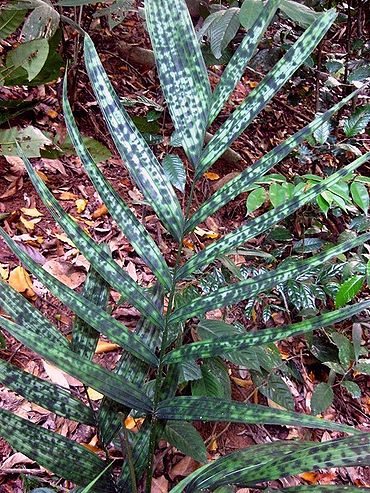 A small, clustering palm to about 2.5 m tall, with pinnate, highly mottled leaves.

Caespitose and clustering palm, stems greenish brown to 2.5 m, 1.5 cm in diameter, with irominent internodal scars at 8-10 cm apart, leaves, 6-8 in crown, pinnate (undivided in juveniles) to 70 cm, with B-9 (to f 3) pairs of leaflets, broader for the apicals, usually strikingly mottled (more so than in certain forms of P. disticha), sheaths 27 cm, yellow to brown forming crownshaft, in- florescences infrafoliar, 2-B on nodes below, de- flexed, sometimes erect rachillae green to coral red (distinct in color and usually longer than in P badia) 2-4 branched 12-20 cm, peduncle to 3.5 cm, flowers not examined, fruit distichous, to 20 pairs,o void, beaked, 1 x 1.5 cm, ripens scarlet to black. (Hodel, D. 1997.) Editing by edric.

This clustering species is immediately recognizable from P. badia, not only by the light-green mottle on the dark-green leaves, lighter on the underside, but also by the less numerous leaflets, and the yellow crownshaft. The rachillae are normally green to coral, vs. yellow for P. badia. and the drupes sreen to scarlet and black, those of P. badia being brownish pink turning black. This taxon has only been collected on a few occasions, but had been tentatively identified as probably related to P. fruticans, an elusive Rid- Iey species, which he confused with specimens of P. kuhlii, his own original collection being most likely P. scortechinii. The new Pinangahas been named after Watana Sumawong, the emi- nent palm enthusiast and pioneer collector of Bangkok, who had himselfc ollected it in 1986a t the same location. It has so far not been found elsewhere, and could be endangered because of its horticultural appeal. (Hodel, D. 1997.)

"Slow growing, apparently clustering palm. Leaves are mottled green-yellow. Plant origins are Thailand, in the Phuket area. I've been growing it in South Miami for about 3 years, generating plenty of new leaves. Seem to be fine in shady location. I water it frequently in the winter. The 10 to 12 ft height is a guess, as I couldn't find much out about the palm." (Kiloa)