Indonesia (Sumatera); Malaysia (Peninsular Malaysia). This species occurs in the undergrowth of rainforests below 800 m asl. Specimens have 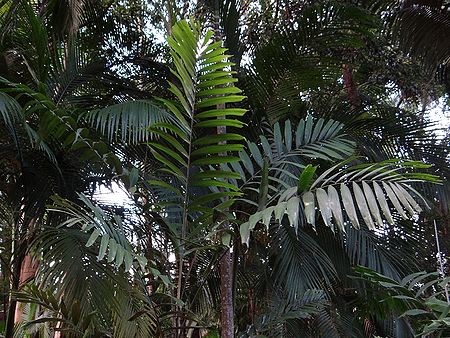 Photo by Gilio Giacomozzi
been found in Dipterocarp and secondary lowland forest.

Conservation: This species is present in several protected areas. It is cultivated in Singapore botanic gardens and was given a conservation status of 'Rare' in Indonesia-Kalimantan, in the 1997 IUCN Red List of Threatened Plants (Walter and Gillett 1998). General threats to the habitat in which this species occurs include: large-scale clearing for plantations and agriculture, especially of rubber, coconut, and oil palm for export production (WWF 2001). Pinanga patula is confined to Sumatera. It occurs within a number of protected areas, although many have been illegally logged and used for the palm oil industry. As the species has a large range and does not does qualify for any threatened categories it has been placed in the Least Concern category. 2013.

Pinanga patula is endemic to Sumatera. It is also reported to be scattered through the hills and mountains of Malaya, from Perak and Kelantan to Singapore (Whitmore 1998) although this may refer to another species such as P. limosum (J. Dransfield pers. comm. 2012).

This smallish, rather rare, clustering palm with broadly pinnate leaves is native to rainforests on Sumatra and adapts readily to cultivation in a variety of tropical climates. (RPS.com)