This Phytelephas is native only to southwesternmost Colombia (Nariño) 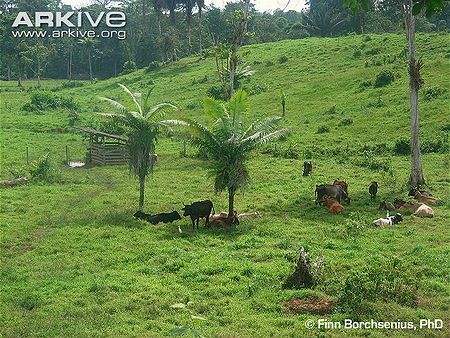 Solitary palm, growing up to 10 metres tall. The unbranched stem can be 20 cm in diameter; it is topped by a crown of 10 - 15 more or less erect leaves that can each be up to 5 metres long. Editing by edric.

The seeds have been traded internationally in the past as a source of vegetable ivory. The plant is also used locally as a food and source of thatch. Sub-populations have been severely decimated by agriculture and are now restricted to only a few rivers. The plant has a range of uses - utilization and trade continue at local and minor international levels.The plant is classified as 'Endangered' in the IUCN Red List of Threatened Species(2011)

One of the rarest Ivory Nut Palm, this Phytelephas is native only to southwesternmost Colombia (Nariño) and extreme northwestern Ecuador, where it grows in wet lowland areas. Formerly large stands of this palm have been severely decimated and are now considered endangered. While generally similar to P. aequatorialis in forming a tall, rough, solitary trunk, a spreading crown of pinnate leaves and large heads of heavy fruits, P. tumacana is easily distinguished, however, by its flat leaves with evenly arranged leaflets that give it a much neater appearance than the often slightly tattered looking P. aequatorialis. Phytelephas represents one of the most ancient branches in the palm family. Its unusual seeds are somewhat lengthy to sprout (use deep pots), but once above the ground, seedlings are pretty fast growing and easy to maintain. An interesting and rarely seen palm tree that looks best in a humid and shady place under larger trees in the tropical and subtropical garden. Despite its very tropical origin, P. tumacana is surprisingly adaptable. (RPS.com)