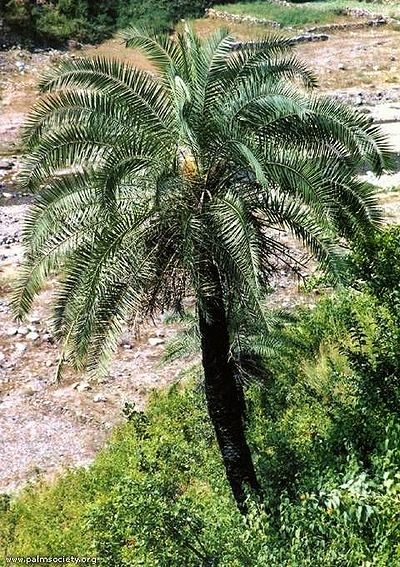 Phoenix loureiroi var. pedunculata: An extremely variable species with a widespread distribution ranging from India through China to the Philippines. This form originates from up to 1800 m (6000 ft.) in the Western Ghats, a chain of Mountains along the west coast of India, bordering the Arabian Sea. An attractive, small, suckering type, it features compact growth and intriguing bluish leaves. A very robust species that will thrive in temperate or tropical climates and will tolerate frosts, drought and neglect and still look great. Sub-var. Kashmir; This form is native to the Himalayas in northern Pakistan. It is an attractive, nonsuckering type and is found at altitudes of around 1500 m (5000 ft.) at the northern distribution limit for the species. A very robust species, it will thrive in a range of temperate climates and will tolerate moderate freezes. Sub-var. Kyber; This form is native to the foothills of the Hindu Kush in the Khyber Pakhtunkhwa province, formerly known as the North-West Frontier Province in northeastern Pakistan, and next to the famous Khyber Pass to Afghanistan. Temperatures go well below freezing here in winter and summers are blasting hot, a different and much drier climate than this species is adapted to in the Himalayas." (rps.com)