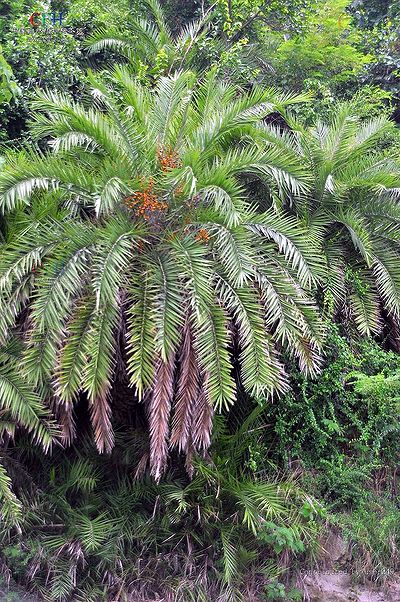 Photo by 中文名：刺葵
Sub-Himalayan belt southwards through India, and eastwards through Indochina to southern China (including the islands of Hong Kong and Macao), Taiwan and to Batanes and Sabtang Islands of the Philippines. A variety of habitats from sea-level to 1700 m, in open scrublands or as part of the undergrowth of dry dipterocarp, mixed deciduous or pine forest. The species is very common in disturbed, anthropogenic areas such as seasonally-burnt grasslands, along roadsides or raised ground bordering rice-paddy. As with all species of the genus, staminate flowers of P. loureiri are visited by a range of insects, particularly beetles, but it is not known which are the pollinators and which are merely pollen thieves. The fruits are eaten by a range of birds and mammals attracted by the sweet but thin mesocarp. (S.C. Barrow. 1998)/Palmweb.

Etymology: Epithet named after Joao de Loureiro, description originally written by Kunth as loureiri, but has since been corrected to loureiroi.

Conservation: Phoenix loureiri is not considered to be threatened because it thrives in disturbed, anthropogenic areas. However, populations are declining in certain parts of their ranges. Padmanabhan & Sudhersan (1988) noted 'mass destruction' of the species on hillsides in southern India due to heavy pressure from harvesting for leaves. Gruezo & Fernando (1985) called for continued protection of the species in the Philippines, where it is found only in localised populations on Sabtang and Batanes Islands. (S.C. Barrow. 1998)/Palmweb.

Uses: The leaflets of P. loureiri have many domestic uses, such as the manufacture of mats and brooms. In the Philippines shredded, sun-dried juvenile leaves are woven as raincoats (Gruezo & Fernando 1985). The apical bud is sweet and can be eaten as a vegetable (palm cabbage). The fruits are sweet, if a little mealy, and are commonly eaten by children. Padmanabhan & Sudhersan (1988) noted the medicinal use of the species by tribal people in southern India. (S.C. Barrow. 1998)/Palmweb.