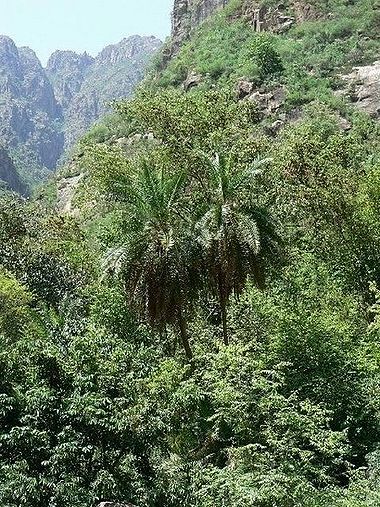 Phoenix caespitosa is a dwarf palm described by Chiovenda (1929) from Somalia, and later recorded from Saudi Arabia and Yemeni Arab Republic. Of the many names published for Phoenix palms in Africa most refer to the polymorphic species P. reclinata. However, I consider P. caespitosa to be a distinct species. Staminate flower petals of P. caespitosa are rounded apically, as against the acute to acuminate petal apices of staminate flowers of P. reclinata. (S.C. Barrow. 1998)/Palmweb.

Uses: The fruits of P. caespitosa have a sweet and moist mesocarp layer, making them much sought after by animals including humans in Somalia (Abdi Shire, pers. comm.). (S.C. Barrow. 1998)/Palmweb.