Endemic to the Seychelles, being is fairly widespread on the larger islands of the group, 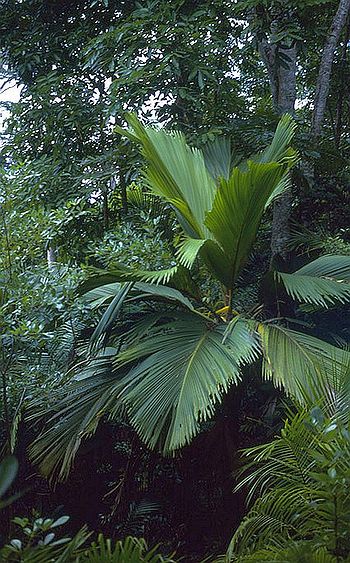 Mah, Seychelles. Photo by Dr. John Dransfield, Royal Botanic Gardens, Kew/Palmweb.
such as Mahé, Silhouette, Praslin, and La Digue. It is found in forests, but is one of only a few native plants in the Seychelles that can colonise dry and eroded areas, as it is capable of withstanding full sunlight and periods of drought.

Phoenicophorium borsigianum is endemic and fairly widespread to the Seychelles in the Indian Ocean, and occurs on the eight islands Mahé, Praslin Silhouette, La Digue, Frégate, Curieuse, Félicité and St. Anne. These islands have a total area of 235 km2 (National Statistics Bureau 2005). The extent of occurrence is less than 5,000 km2 and the area of occupancy is smaller than 500 km2. This spectacular palm is found in the undergrowth of moist forests at low and intermediate altitudes, either on deep shade and in more open rocky outcrop areas, but can even establish in heavy degraded and invaded forest, dominated by alien invasive species.

The species is able to establish itself in different habitat types and even colonizes bare eroded ground where drought is severe and able to establish on rocky outcrops. It forms large stands on the islands and is frequently associates with Lodoicea maldivica. In areas with closed canopy it is also able to compete with Cinnamomum verum. The leaves have been extensively used in the past for thatching of roofs. For tourist infrastructure this practice has a renaissance. While it is not thought that this is currently causing a decline in the population, future trends need to be monitored. There is no continuing decline observable, as the species reproduces extremely well in most areas.

Ecology: This palm has prominent spines on their stems and leaf bases, a feature generally thought to be a defense against the giant tortoises that used to roam free in the islands. The large leaves provide shelter for geckos and invertebrates as the pleated surface acts as an effective litter trap thus providing cover for small animals. (llifle.com)

This palm is a fairly tall, solitary tree, with long leaves extending from the trunk. The stems are heavily ringed with leaf scars, formed by the loss of leaves, and bear black spines on younger plants. The leaves can reach up to two metres in length; they have a crinkled appearance due to the prominent veins, and are split at the ends with orange-edged serrations. The leaf stalks themselves may be up to half a metre long and are also armed with black spines. Both male and female flowers are borne on the same tree on an inflorescence that emerges below the crown. Small, oval fruits develop, which are orange in colour and may be up to 1.5 cm long. Editing by edric.

"Warm, sunny, moist, but well drained position. Altho a plant of the deep rainforest, it can stand almost full sun from quite an early age. Tropics and warm sub-tropics only." (Mike Gray)

Etymology: Genus Name Meaning: Comes from the genus name, Phoenix (referring to a pinnate leaf palm in this context), and the Greek word for 'stolen', referring to the fact that an early specimen was stolen from the Royal Botanic Gardens, Kew.

Uses: The leaves of the thief palm provide shelter for geckos and invertebrates as the pleated surface acts as an effective litter trap thus providing cover for small animals. Locals use the large, dried leaves for thatching.