Endemic to Sulawesi, And The Moluccas. Along the edges of Mountainous 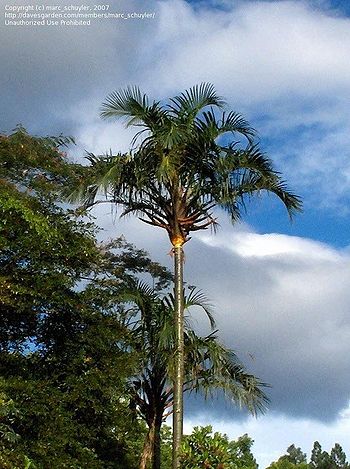 Pigafetta elata is a very fast and tall growing, solitary palm, that can reach a height of 50 metres. The plant is exploited extensively in its native range for its timber. It is attracting interest as a potential commercial timber crop in areas with similar climates. Editing by edric.

"They certainly are rocket ships. You have to keep them permanently wet, and fertilize every couple of weeks when in a pot for best growth.. They grow much better when planted, and need full sun, right from a seedling." (Daryl O'Connor)

Plants succeed in moist tropical climates where temperatures never fall below 10°c, the average annual rainfall is 1,500 mm or more and the driest month has 25 mm or more rain. Requires a sunny position and a deep rich soil. Plants grow well in full sun, even when small. One of the fastest growing Palm species, it can grow 2 metres per year. A dioecious species, both male and female forms need to be grown if fruit and seed are required.

Propagation: Seed - pre-soak for 24 hours in warm water and sow in containers. The seed must be fresh - germination is usually rapid, sometimes taking less than a month.

This is a dioecious genus. Uses: Fruit - occasionally eaten. The ovoid fruit is about 12 mm in diameter. A fibre obtained from the young leaves is used for making thread. The leaves are made into small rugs. Wood - very hard. Used extensively for construction.

This palm is generally perceived to be the world's fastest growing palm. Native to northern Sulawesi (Celebes) in Indonesia, it is found in rainforests at altitudes between 450 and 900 m (1500 and 3000 ft.). It sports a large, very straight, columnar, glossy green trunk that holds a spherical crown of elegantly recurving pinnate leaves, V-shaped in cross section. Apparently an opportunistic plant, it establishes itself not in the closed forest but in gaps in the canopy. In cultivation, plants thus need good light early on. Though tropical in its requirements, P. elata is said to be a little hardier than its cousin P. filaris as P. elata is from a higher altitude, enabling it to grow in marginal areas such as Southern Florida. Even though seeds are rarely available, P. elata is far more commonly cultivated than P. filaris. The two species are easily told apart by their leafbases: as opposed to the sparsely spiny, waxy leafbases of P. filaris, the leafbases of P. elata are densely covered with masses of blackish spines. (RPS.com)