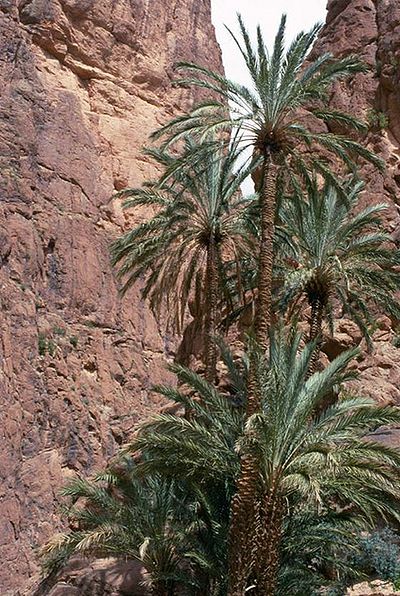 Rounded crown of dark green feather leaves 3-5 m long, with pinnae to 20-40 cm long closely spaced along the rachis. Like all Phoenix, it has long, sharp spines at the bases of the leaves, which are formed from modified leaflets.

The species is dioecious, with separate male and female trees. The fruit are yellow or orange when ripe (turning brown when dried), 3-5 (-7) cm long and 2-3 cm diameter, with a large seed; the fruit pulp is edible and delicious, and is the basis for a major fruit crop of global importance (dates). They are produced on long, densely branched panicles. Editing by edric.

It is also grown as an ornamental tree; it is popular with people starting growing palms for the first time due to the very easy availability of seed; the stones from shop-bought dates (even dried dates) will grow readily. As an ornamental plant, it is however less attractive than many other palms, with sparser, more rigid foliage (less graceful) than the related Canary Island Date Palm Phoenix canariensis.

It will tolerate frosts down to about -10°C but only for brief periods, and cannot tolerate cold wet winter weather as well as P. canariensis; this makes cultivation outdoors in e.g. the British Isles impossible, unlike P. canariensis which can be grown there in milder areas.