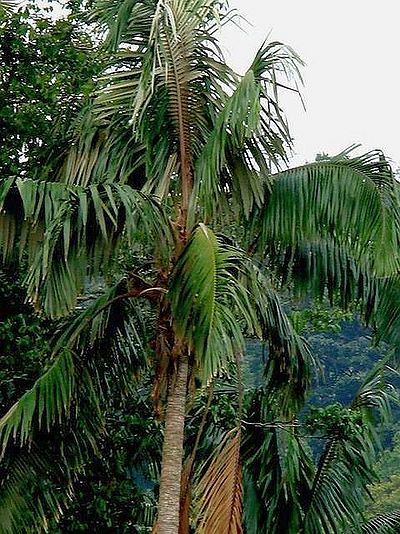 Taman Sebaya, Selangor, Malaysia. Photo by Dr. Ahmad Fuad Morad.
Palm is found from lowland rainforests, and as high as up to 1,000 m.

The stem is slender and armed with sharp spines on the trunk and leaf stalks (and thus the specific name of “horridum”). The leaflets are drooping, giving the crown a feathery appearance.

Etymology: The specific epithet from the Latin, meaning; Prickly.

"The local host plant, Oncosperma horridum, is a tall clustering palm with pinnate leaves, and with its stem covered in black and downward pointing spines. This palm can be found growing in the Central Catchment Reserve, in relative abundance at certain localities. The caterpillars of the Yellow Vein Lancer feed on leaves of this plant, and live in shelters made by joining edges of leaf fragments together with silk threads. The eggs are laid singly on the upperside of a leaflet of the host plant." (Horace Tan, Butterflies of Singapore)

Diagnostic: Oncosperma horridum is a solitary or clustering palm found in inland nature reserves. It has straight upright stems growing over 20 m tall and is covered with long, downward pointing prickles.

This palm is a close relative of the famed nibong palm (Oncosperma tigillarium) of the mangrove. Both species have seawater-resistant stems and are often used in the construction of kelongs (wooden structure on silts in the sea for rearing or catching of fish).

The only other similar species is the Nibong, Oncosperma tigillarium. However this congenor is found near water bodies, always clustering, have thinner stems and very droopy leaflets.

Interesting Facts: The Mountain Nibong Palm is found from lowland rainforests to up to 1,000 m (Henderson, 2009).

A slender, tall, clustering palm native to rainforests on the Malay Peninsula, Sumatra, Borneo and the Philippines, to 700 m (2300 ft.). In contrast to the more widely cultivated O. tigillarum it has fewer, and thicker trunks, and larger leaves on which the leaflets are held flat on one plane, rather than drooping as in O. tigillarum. (RPS.com)