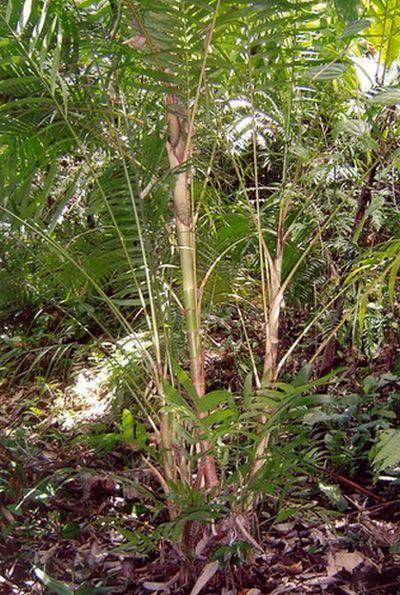 Pinanga neglecta Burret was based on a collection from Reservat Depok near Bogor in West Java. The holotype (Burret 330) has not been found among the remaining Burret palm collections in Berlin. However, the original description matches N. pumila var. pumila and cannot be referred to any known Javanese Pinanga (Dransfield, pers. comm.). P. neglecta is, thus, here reduced to synonymy under N. pumila var. pumila. Nomenclatural Notes. Until 1935, this species was commonly known as Nenga wendlandiana. The name was proposed by Scheffer in 1876 for the type species of the genus, originally designated by Wendland and Drude (1875) as Pinanga nenga BI., but unfortunately no new combination was made. The name N. wendlandiana Scheff. is, however, illegitimate as was discussed by Furtado (1935). Wendland (1878) who strictly followed the rule of priority, provided the correct and valid combination-Nenga pumila (Mart.) H. A. Wendl.-based on Areca pumila Mart., which is an earlier validly published name for Pinanga nenga BI. Furtado (1935) discussed in detail this particular nomenclatural problem and gave satisfactory reasons why N. wendlandiana should be rejected and N. pumila accepted. (E.S. Fernando. 1983)/Palmweb./Palmweb.