Borneo, and Sumatera. In hill Dipterocarp forest on hillslopes, valley bottoms, and 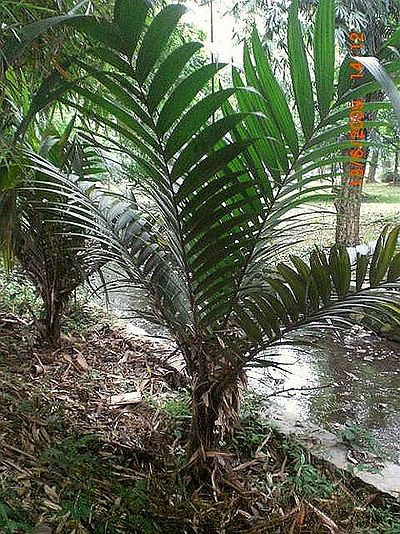 This is native to low-land of Jambi province, Sumatra Island, Indonesia. Found in shading area along river bank, it may needed plenty of water.

This species differs from all other species of Nenga in its interfoliar, erect inflorescence with a long peduncle, and bearing a persistent, coriaceous, woody prophyll, the club-like head of fruits, and the structure of the male flowers with minute sepals. This species possesses many aberrant characters; however, despite the peculiar nature of this taxon, it seems to fit more reasonably in Nenga than in any other closely related genus. The laterally attached ovule, the spirally arranged triads near the proximal end of the rachilla, and the distal terminal portion being entirely of staminate flowers are distinctive features of Nenga (see Dransfield 1975). (E.S. Fernando. 1983)/Palmweb.