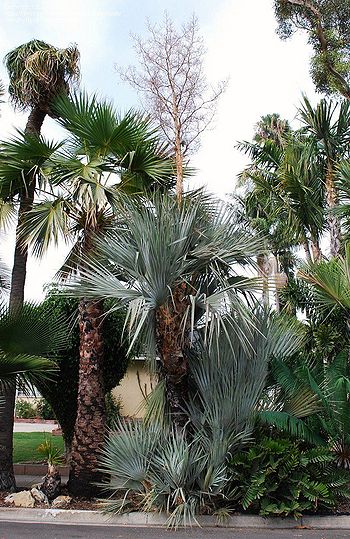 Southern California. Photo by Geoff Stein
native to southwestern Asia, from the southeast of the Arabian Peninsula east through Iran and Afghanistan to Pakistan and northwestern India, growing in dry areas at altitudes of up to 1600 m.

Clustering palm, occasionally single-trunked, growing to 6 metres tall. The leaves are fan-shaped, costapalmate, with 20-30 leaflets, each leaflet 30-120 cm long, usually glaucous-green, though very pale forms, as well as silver forms exist. The stems and leaf petioles are not spiny. Leaves are generally stiff and maintain an open fan shape, but floppy-leaf forms with markedly drooping leaflets exist as well. Individual stems are both monocarpic, and Hapaxanthic flowering once and then dying, but new stems are produced at the base (or higher- this is one of the few true, aerial branching, palm species) keeping the plant alive. The inflorescences are produced on a 2-3 m tall stem at the top of the trunk, forming an open panicle. Editing by edric.

Perhaps one of the toughest and hardiest palms is Nannorrhops ritchieana, the Mazari palm. Although this palm does not form a traditional trunk, it looks just as striking in any landscape. Mazari palm grows in a shrub or mounding form 10-20 ft (3.1-6.1m) tall and spreading even more than that. The semi-palmate leaves, similar to those of cabbage palm, are about 4 ft (1.2 m) wide, 4 ft (1.2 m) long and have unarmed petioles, 1-3 ft (0.3-0.6 m) long. Mazari palm does not have a crownshaft and its stem remains below ground. Mazari palm has branches above ground and slowly develops a bushy shrublike appearance. Each stem or branch is monocarpic which means that it flowers only once, then dies back and produces an offshoot. The white flowers are held out and above the foliage in 4-6 ft (1.2-1.8 m) long branching clusters. The fruits, which are edible, are 0.5 in (1.3 cm) in diameter and are brown to orange in color, with a single seed. (floridata.com)

Nannorrhops ritchieana is highly drought tolerant, and also very tolerant of winter frost, hardy down to about -15°C, possibly -20°C, but needs dry conditions and good drainage. Good growth occurs in southern California. It cannot survive wet cold, and has not been successful in humid, high rainfall climates such as Britain. However, it does very well in warm, humid, high rainfall climates such as southern Florida. Seedlings are particularly touchy and rot easily if over watered in cooler conditions. Once mature, cool and cold are much better tolerated. Cold is not nearly as much a problem if it is extremely dry as well. Cold Hardiness Zone: 7a

Mazari palm tolerates poor, dry, infertile soils. Although growth is normally very slow, proper care and fertilization can speed it up significantly. Mazari palm is susceptible to lethal yellowing and Ganoderma fungus. Light: Full sun. Moisture: Mazari palm is very drought tolerant - but you should water when dry to speed up the growth rate. Hardiness: USDA Zones 8 - 11. Mazari palm is adapted to desert conditions of extreme hot and cold, and is one of the most cold hardy palm known. Propagation: Mazari palm is propagated by seeds which geminate slowly and sporadically over a long period of time. It also is possible to divide the clumps. (floridata.com)