Egypt, and Sudan. Medemia argun occurs as scattered individuals and populations in the Nubian 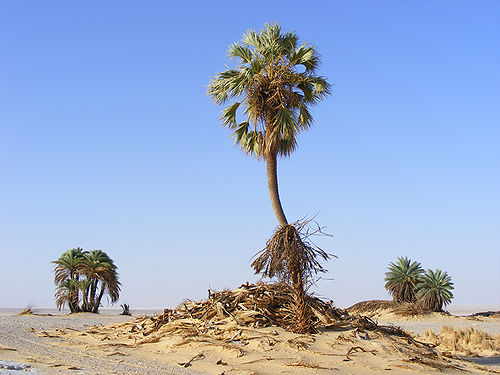 Nakhila Oasis, Egypt. Photo by Haitham Ibrahim
desert of southern Egypt and northern Sudan. It was first described as Areca passalacquae from fruits collected by archaeologists from Egyptian tombs dating back to 2500 BC (Kunth 1826). Not until 1881 was the palm described from living material collected in Sudan. Since that time, Medemia argun has been collected on very few occasions. It was not discovered as a living member of the Egyptian flora until 1963 (Boulos 1968). The palm was subsequently considered extinct in the wild until its rediscovery in Sudan in 1995 (Langlois 1976, Gibbons & Spanner 1996). The main Egyptian population consists of just four males and three females of reproductive age, plus some juveniles, with the few other sites consisting of lone individuals. The Sudanese populations are larger, consisting of some hundreds of individuals, but these localities are geographically restricted. (virtualherbarium.org)

Medemia argun is restricted to a few localities in the Nubian Desert oases of southern Egypt and northern Sudan. This region is so arid that consecutive years pass without any rain falling.

Medemia argun, as with all desert palms, can only grow in oases where ground water occurs.

The argun palm is a dramatic single-stemmed palm, with fan-shaped leaves that are glaucous blue (blueish-green with a whitish bloom) and have bright yellow petioles (leaf stalks). It is dioecious, meaning that individuals are either male or female. It produces inflorescences (flower-bearing parts) with numerous catkin-like branches. The female bears plum-shaped fruits which are purple-black when ripe. The fruit flesh is very thin and surrounds a large seed. The fruits fall from the tree and lie baking in the intense desert sun. Medemia argu Though desert mammals appear to eat the flesh, the main dispersal agent could be water during flash floods following very infrequent rains. (Kew) Editing by edric.