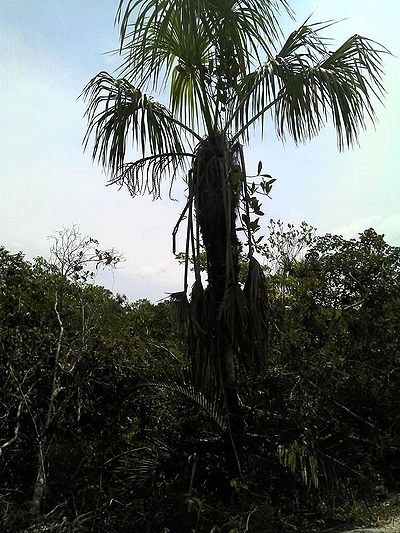 Height; up to 40 Ft. Mauritia carana is a large, single-stemmed, evergreen palm growing up to 25 metres tall. The unbranched bole can be 60 cm in diameter, topped by a crown of 6 - 12 large leaves. (tropical.theferns.info)

This is a large smooth-stemmed species allied to M. flexuosa, but quite distinct and hitherto undescribed. The stem is about a foot in diameter and from twenty to forty feet high, smooth and obscurely ringed. The leaves are very similar to those of the Mirití, but the leaflets are not so deeply divided, being united together at the base for one-third of their entire length, and much more drooping at the tips. The petioles are very large, straight and cylindrical; their dilated bases are persistent for a considerable distance down the stem, and their margins give out a quantity of fibres which clothe it as in the Leopoldinia piassaba, though rather less densely. The spadices grow from among the leaves and are somewhat more erect and much smaller than in the Mirití, and the fruits are less abundant, smaller and slightly ovate. The leaf-stalks of this species are used for the same purposes as those of the Mirití and Jupatí already described, as those palms are generally absent where this is abundant. The part most generally used, however, is the leaf, which for thatching is preferred to that of any other species, on account of its having so large a portion of the base entire and being of a very durable texture. A roof well-thatched with Caraná will last eight or ten years without renewing, and the leaves are so constantly cut for this purpose that it is hardly possible to find an entire and handsome tree. Though so closely resembling the Mirití, the epidermis is never used for cordage, and on my asking an Indian the reason, he quite laughed at the idea, saying that it was quite impossible because the Caraná "did not produce any thread." This tree grows in the district of the Rio Negro and Upper Orinoco, but is not found on the Amazon. It prefers the dry Catinga forests, or the sandy margins of streams out of reach of the highest floods. At Javita I observed it growing within a few yards of the Mirití, but still preserving all its distinctive characters. It is called by the natives Caraná, the smaller prickly stemmed species being known by the name of Caranaí. (Wallace online) Editing by edric.

Uses: Although the fruits are considered edible, and similar to those of the "canangucha" (Mauritia flexuosa), apparently, they are not so palatable. Pod fibers are used for manufacturing brushes sporadically. A beverage is obtained from the fruit. The young leaves are a source of fibre. The fifre obtained from the sheaths is used to make brooms. The leaves are used for thatching. The trunks are used in building.

The tree is widespread in the Amazon Basin, but is uncommon. It has been classified as being of 'Least Concern' in the IUCN Red List of Threatened Species(2010) (tropical.theferns.info)