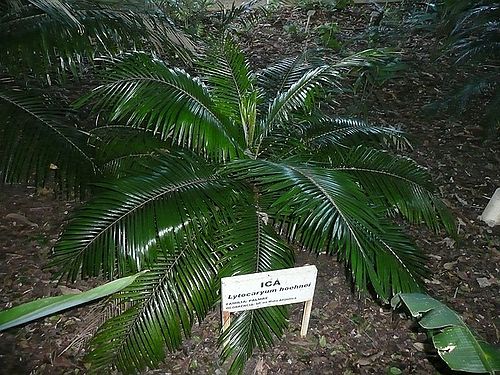 Harri Lorenzi's PLANTARUM, Instituto Plantarum de Estudos da Flora LTDA. Nova Odessa, Campinas, Brazil. Photo by Al in Kona.
In southern Brazil, L. hoehnei is confined to a patch of mountainous forest between 800 and 975 m of elevation, in nearly year-round rain; there it is almost extinct. L. weddellianum is found on Brazil's southeastern coast where development has also caused it to become endangered. It grows in rain forest to 900 m in elevation; both are restricted to filtered light and humus-rich soil.

Solitary, pinnate palm, closely ringed and retain leaf sheaths at the top of the stem. The trunks reach 15 cm in diameter to 5 m (16 ft.) in height, but are usually just half that in cultivation. The spherical leaf crown consists of numerous pinnate leaves to 75 cm long on hairy, 30 cm petioles. The pinnae are 12 cm long, closely and regularly arranged along the rachis, in the same plane, green on top with gray, glaucous undersides. The inflorescence is interfoliar and once branched, covered in brown hair, monoecious (flowers of both sexes). The female flowers are twice as big as the male's, both with three sepals and three petals. The fruit is globose to ellipsoidal, pink to red, with one seed. Editing by edric.

I have grown this palm in San Jose, CA for nearly 6 years and no matter how low the temperature has been, close to 24F one year, not even a spot. One plant grows up against the house, (too close). Never any damage. Two other plants grow well away from the house under 50% shade cloth and never is there even a spot on them in the winter. Any new ones I get will be placed in higher light conditions as I think they want more light then I'm giving them. I saw a nearly full grown specimine on the Island of Maui and it was in near full sun and it was beautiful. (SanJoseDaveforPalms)

Etymology:The genus name is Greek for "loose" and "nut". The specific ephitaph named after Brazilian botanist of the 20th century, Frederick C. Hoehne (1882-1959).