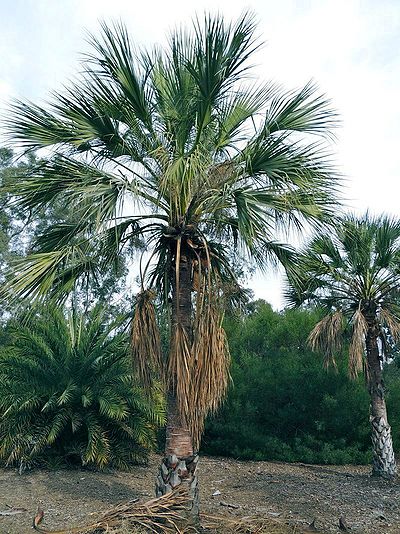 Los Angeles arboretum, CA. Photo by Geoff Stein
Occurs as a riparian element along the margins of streams and in seasonal gullies and associated floodplains with high watertables, at 140-270 m alt.

Livistona lanuginosa was described by Rodd (1998) based on Irvine 1912 collected from Glenroy Ck, a tributary of the Burdekin R., Queensland, and named for the densely lanuginose inflorescence bracts. Bailey (1902) had previously determined the population to be L. mariae:" I have received a portion of a leaf from F.L. Berney, of Hellenslie, Campaspe R., which in all probability belongs to this inland palm". Recently, the species was informally known as "Livistona sp. Cape River" (Jones, 1996). Livistona lanuginosa most closely resembles L. mariae and L. rigida, but is eadily distinguished by its much larger fruit and the densely lanuginose prophyll and inflorescence bracts. An interesting historical account was provided by Leichhardt (1847) who noted this palm in the diary of his transcontinental expedition of 1845: " (in the Burdekin R. valley on 25 March 1845)" at the junction of the creek, a great number of small Corypha palms were growing, and my companions observed the dead stems of some very high ones, whose tops had been cut off by the natives, probably to obtain the growing shoot". Livistona lanuginosa is one of Australia's most endangered palms (Dowe, 2007). Pettit and Dowe (2003) undertook a population study and estimated that the total population consisted of less than 1000 mature individuals, all of which occur on private property within the Burdekin R. catchment. Primary threats are trampling and browsing of seedlings and juveniles by cattle, which prevents regeneration. Livistona lanuginosa is a large sub-canopy to canopy palm to 18 m tall; leaves are large and regularly segmented; segment apices are rigid to semi- endulous, and with a bifurcate cleft to 63% of the segment length; he inflorescence is unbranched, not extending beyond the limit of the crown, and with up to 12 partial inflorescences; bracts are loosely sheathing and distinctively densely tomentose/lanuginose; flowers are cream to yellow; fruit are globose to 36 mm diam., and purple brown to black at maturity. (Dowe, J.L.)/Palmweb.

One of the faster growing fan palms for Southern California- not a common one in cultivation (yet), though. Has upright habit, somewhat narrow, grey-green fan leaves that droop only near the tips. Australian native. (Geoff Stein)

A robust Livistona from inland areas in N-Queensland, Australia, closely related to L. mariae. The Cape River fan Palm has fairly stiff, waxy, blueish leaves and large purplish fruits. It is best suited to drier climates and quite cold and even frost tolerant. (RPS.com)